Politics of the Winter War

The Soviet Union’s invasion on 30 November 1939 came as a surprise to the Finnish government. The Soviet Union only recognised the Finnish People’s Government, which it had established in Terijoki. The League of Nations expelled the Soviet Union from the organisation. At the end of January, contact was made with the Soviet Union from Stockholm. The Finnish government had doubts about whether the military assistance promised by the Western Allies would arrive. Sweden and Norway refused to allow the Allied forces to pass through their territories. Finland had to settle for a harsh peace that came into effect at 11am on 13 March 1940. The peace treaty had been signed in Moscow the previous night.

Germany’s invasion of Poland on 1 September 1939 had led to the United Kingdom and France declaring war on Germany. However, the war events of the large-scale war that had started in Europe remained few throughout the Winter War.

The first foreign media representatives arrived in Finland in autumn 1939 once the Soviet Union and Finland started negotiations in Moscow at the Soviet Union’s initiative.

Public opinion in the West was on Finland’s side

Events in the war between Germany and the Western powers remained few throughout the Winter War. It remained a fixture in the headlines of Western press and radio news. The daily news of Finland’s successful defensive battles contributed to the public opinion in different countries. It particularly impacted the efforts taken by the governments of the United Kingdom and France to assist Finland. 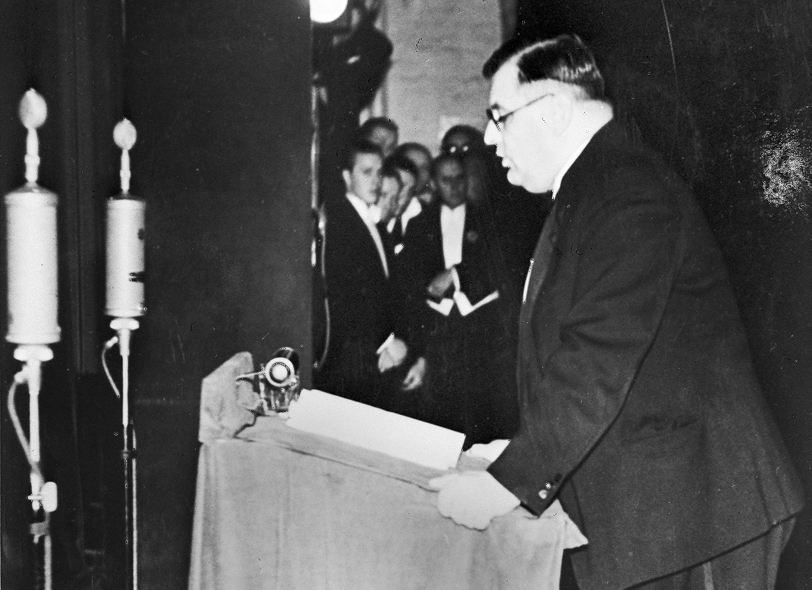 The foreign policy of Prime Minister A. K. Cajander’s government hit a dead end on 30 November 1939. Eljas Erkko was the government’s minister for foreign affairs. The Soviet invasion of Finland was also felt concretely in the capital, Helsinki, which was bombed by the Soviet Air Force on the very first day of the war.

The Finnish Parliament gave a vote of confidence

Finland launched its peace efforts after Parliament’s vote of confidence. The first step was replacing Finland’s government. A new government was formed on 1 December 1939. Risto Ryti, the governor of the Bank of Finland, was appointed prime minister, while Väinö Tanner, the chairman of the Social Democratic Party, was appointed minister for foreign affairs. He had served as minister of finance in the previous government. Juho Niukkanen continued as minister of defence from the previous government. He was one of the influential members of the Agrarian League. J. K. Paasikivi was appointed to the government as minister without portfolio. Paasikivi served as Finland’s envoy to Stockholm. On 1 December, the Finnish Parliament evacuated to a secret location, namely Kauhajoki.

Sweden refused to participate in defending the Åland Islands

On the day it was established, the new government turned to Sweden to request for military assistance for the defence of the Åland Islands. This request was made orally to the Swedish envoy to Helsinki. Sweden denied the request, standing firmly by its neutrality. It could only assist Finland by selling weapons and sending volunteers.

Finland and Sweden had agreed upon principles for the joint defence of the Åland Islands in January 1939. This agreement had been reached after difficult negotiations. However, the final approval of the agreement required conditions that were not realised before the Winter War.

In February, Sweden redeclared its intention to remain non-belligerent in the war

In late February 1940, Sweden made public a declaration by the king. In this declaration, King Gustaf V announced his intention to stand by the stance he had previously expressed to the Finns, namely, that Finland could not rely on an intervention from Sweden. This declaration crushed Finland’s hopes of obtaining active troops from Sweden once and for all. The Mannerheim Line had just been breached on the Karelian Isthmus. 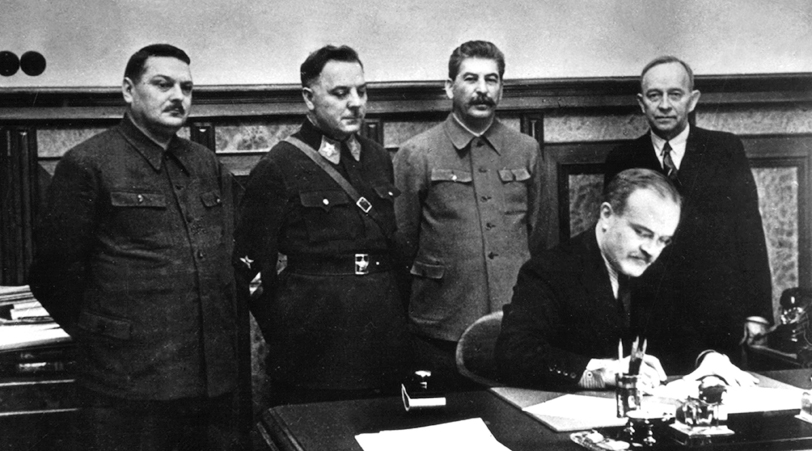 On 2 December 1939, the Soviet Union and the Finnish People’s Government, which had been founded in Terijoki (Zelenogorsk), signed a treaty of mutual assistance and friendship. People’s Commissar for Foreign Affairs Molotov signing the agreement. Behind him, Chairman of the People’s Government O. V. Kuusinen. On the left side of Stalin, People’s Commissar for Defence Kliment Voroshilov and Chief of the Leningrad Communist Party Andrei Zhdanov. Image: Photo12/UIG/Getty Images.

The new government aimed to re-establish peace. The attempt made through Sweden to initiate negotiations with the Soviet Union was rebuffed on 4 December. The Soviet Union refused to negotiate with Finland. It was only willing to negotiate with the Finnish People’s Government, which had been formed in Terijoki (Zelenogorsk) with O. V. Kuusinen as its leader. Two days earlier, the Soviet Union had rejected a mediation offer from the United States of America, citing the same grounds.

Finland turned to Hungary in the first days of December and asked it to persuade Germany to become the peace mediator. However, Germany stood by the non-interference policy it had already demonstrated during the additional refresher training with regard to the relationship between Finland and the Soviet Union.

Foreign Minister Tanner made another attempt to initiate negotiations with the Soviet Union on 15 December by giving a speech addressed to Foreign Minister Molotov on the radio. However, some considered the speech to have been more accusing than conciliatory in nature. The speech received no response.

The Finnish government turned to the League of Nations

While waiting for a response from the Soviet Union, the Finnish government decided on 3 December to turn to the League of Nations. The league was asked to address the invasion by the Soviet Union, and it did so with a favourable attitude towards Finland. However, providing assistance to Finland remained dependent on the individual decisions of each member state. In a meeting held on 14 December, the Council of the League of Nations decided to expel the Soviet Union. This was not in line with Finland’s goals. Finland abstained from the vote.

Towards the end of December, Finland turned to the Western powers

Finland turned to the Western powers for military assistance towards the end of December. On 22 December 1939, the minister for foreign affairs dispatched secret telegrams to the Finnish envoys to France and the United Kingdom. However, the telegram’s contents were up to interpretation. It ‘drew the envoys’ attention’ to the need for military assistance. The Finnish envoy to Paris, Harri Holma, took vigorous action to obtain military assistance. In contrast, the envoy to London, G. A. Gripenberg, interpreted the telegram differently and took a more passive approach.

The Finnish Parliament had already made a public appeal on 10 December. The appeal stated that Finland was fighting to defend a common cause for all mankind. According to the appeal, Finland’s position as a frontier guard for Western civilisation gave it the right to expect assistance from the other civilised states.

Preliminary peace negotiations started in Stockholm towards the end of January

Towards the end of January, contact was established between Stockholm and Moscow through Alexandra Kollontai, the Soviet Union’s ambassador to Sweden. She was contacted by Hella Wuolijoki, who initiated the discussions. Wuolijoki travelled to Stockholm under Foreign Minister Tanner’s authorisation. For its part, Moscow informed Kollontai on 27 January 1940 that it was, in principle, ready to discuss with the Ryti–Tanner government.

Foreign Minister Tanner met with Kollontai in Stockholm for the first time on 5 February. The same day, the Anglo–French Supreme War Council made the decision to send military assistance to Finland. The problem with getting the assistance to its destination was Norway and Sweden’s negative attitude towards allowing troops to pass through their territories.

After this, there were two alternative paths that Finnish foreign policy could take: establish peace with the Soviet Union without mediators or continue the war with military assistance from the Western powers. These options were kept open until the final phases of the war.

Kuusinen became the head of the Karelo-Finnish Soviet Socialist Republic, also called Soviet Karelia. The territories ceded by Finland in the Moscow Peace Treaty were annexed to the republic, with the exception of the Karelian Isthmus, which was annexed to the Leningrad Oblast.

On 5 March, the government decided upon peace, while leaving the back door open for the possibility of military assistance from the Western powers. The following day, the government decided to send a peace delegation led by the prime minister to Moscow. The delegation departed for Stockholm the same evening and continued from there to Moscow on 7 March. After arriving in Moscow, it became clear to the delegation that the Soviet Union would not moderate the peace terms. On the contrary, the Soviet demands turned out to be even stricter than previously stated.

The Finnish government accepted the peace treaty on 12 March, hostilities ceased at 11am on 13 March

The speech began with Minister for Foreign Affairs Väinö Tanner informing the public about the peace negotiations conducted in Moscow and the peace treaty signed there. Tanner went over the parts of the peace treaty that pertained to ceded territories in great detail.

Among other things, his speech included the reasons for why the harsh peace treaty was signed. He also explained why Finland did not present the Western powers with an official appeal for assistance. In Tanner’s opinion, the key reason for this was Sweden and Norway’s refusal to allow the troops of the Western powers to pass through their territories.

Having returned to Helsinki on 12 March, Parliament discussed the government’s proposal on approving the peace treaty between Finland and the Union of Soviet Socialist Republics on 15 March. Parliament accepted the proposal with 145 votes. Three members of Parliament voted against the proposal, while nine abstained from voting and 42 were absent. Some believed that it went against the Constitution of Finland for peace to come into effect before a final decision could be made by Parliament.

Important dates during the Winter War