The negotiations between Finland and the Soviet Union in Moscow broke down without results before mid-November. The Finnish government did not believe that the Soviet Union would attack Finland on the eve of winter. In fact, the government instructed the people who had evacuated voluntarily to return to their home regions and ordered for schools to be reopened after being closed all autumn. The Soviet Union’s accusation of Finland shelling the Soviet village of Mainila was not enough to make the Finnish government believe in the possibility of war. The military operations at the borders and the air raids on the home front that started on 30 November without a declaration of war awakened even the government to the reality of war.

In November, the government prepared the nation for peacetime

In an unofficial meeting of the government on 20 November, Erkko was of the opinion that military preparedness could be reduced. As a result of the meeting, the government agreed that approximately half of the reservists mobilised in the name of additional refresher training would be demobilised by being laid off. Minister of Defence Juho Niukkanen disagreed. He did not take any concrete action to demobilise the men. Field Marshal Mannerheim was also against demobilising the troops.

The government also agreed upon a recommendation for the citizens in voluntary evacuation to return to their home regions. Schools were likewise ordered to restart their operations. In a speech made on 23 November, Prime Minister Cajander urged citizens to return to their normal peacetime lifestyles.

Even the Intelligence Department of the General Headquarters came to the conclusion in its review on 25 November that the Soviet Union would not start a war on the eve of winter.

The Shelling of Mainila, 26 November

On 26 November, the Soviet Union issued a note to Aarno Yrjö-Koskinen, the Finnish envoy to Moscow. In the note, Finland was accused of shelling the Soviet village of Mainila on the Karelian Isthmus. The Soviet Union demanded that Finland pull its troops 20–25 kilometres away from the border. The Finnish government issued a reply note the following day, denying that the shells were fired from Finland and proposing for the matter to be investigated by a joint committee in accordance with the non-aggression pact between the two countries.

The Soviet Union terminated the non-aggression pact on 27 November

Instead of the Soviet Union initiating negotiations to investigate the Shelling of Mainila, People’s Commissar for Foreign Affairs Molotov informed Finnish Envoy Yrjö-Koskinen that the Soviet government no longer considered itself to be bound by the non-aggression pact.

Further pressure was placed on the Finnish government by the resignation submitted to the Finnish president by Field Marshal Gustaf Mannerheim the same day.

As late as 28 November, Foreign Minister Erkko still saw the Shelling of Mainila and the termination of the non-aggression pact as the Soviet Union engaging in psychological warfare. Its goal was to keep public opinion in Finland in suspense and prevent social life from returning to its normal routines.

The Soviet Union broke off diplomatic relations on 29 November

The Finnish envoy was invited to the People’s Commissariat for Foreign Affairs of the Soviet Union at 10:30pm in the evening of 29 November. Deputy Foreign Commissar Potemkin issued a note to Envoy Yrjö-Koskinen in which he announced that the personnel of the Soviet Embassy in Helsinki were being recalled to the Soviet Union. The envoy received an unambiguous oral reply to his inquiry. This signified that the diplomatic relations between the two countries were being broken off.

Late the same evening, People’s Commissar for Foreign Affairs Molotov made a speech on the radio. In this speech, Molotov explained to the public the reasons for why the Soviet Union had terminated the non-aggression pact it had signed with Finland. Molotov accused Finland of continuous military provocations at the border between the two countries. In an accusing tone, he also mentioned the anti-Soviet cooperation between the Finnish government and foreign imperialists. By this Molotov was referring to the United Kingdom and France. The threat posed by these countries had replaced the threat of an attack by Germany in the discussions of Soviet representatives since the signing of the non-aggression pact, i.e. the Molotov–Ribbentrop Pact, between Germany and the Soviet Union on 23 August. 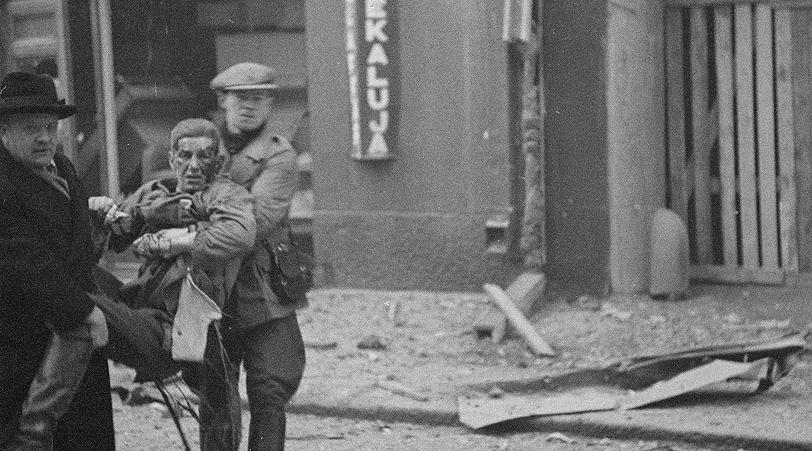 A wounded man being carried on Lönnrotinkatu in Helsinki on 30 November 1939. SA-kuva.

The Soviet Union launched its invasion on 30 November without a declaration of war. The first government members to be notified of the outbreak of war through official channels were Minister of Defence Juho Niukkanen and Minister of the Interior Urho Kekkonen. Though the Finnish Border Guard and Coast Guard had been merged with the Finnish Defence Forces during the additional refresher training, information still passed to the peacetime supervisor of these institutions, i.e. the minister of the interior.

Kekkonen learned of the breach of the border on the Karelian Isthmus around 8am. He called Prime Minister A. K. Cajander and demanded that the government be convened quickly. Cajander responded: ‘Do you mean that we should convene before office hours?’

For many civilians, air raids were the first sign of the start of the war

All in all, approximately 110 people were killed and 250 wounded in the air raids on the first day of the war. The majority of the civilian deaths took place in Helsinki, where more than 90 people died and more than 230 were wounded, with 36 of them seriously wounded.

The first air raid on Helsinki and its surrounding municipalities on 30 November started after 9am. The damage was minimal. However, the all-clear signal was not sounded until after 2pm. The fateful second air raid on Helsinki started without any prior warning approximately half an hour after the all-clear signal had been sounded. The air raid alert was sounded shortly before 3pm. By then, the air raid was already over.

For some in the border region, the war started with the enemy appearing at their front door

The civilians who had returned or were in the process of returning to the cities from voluntary evacuation in the countryside understood even without the government’s instructions that the best thing to do was return to the countryside. However, finding transport and cars was now significantly more difficult. On 30 November, the government decided to extend the mandatory evacuation of the municipalities at the eastern border. However, the decision was made far too late. The delay in making the decision affected the people who lived near the border in the municipalities of Suomussalmi and Suojärvi(Suoyarvi). In the latter, the area around the ‘Hyrsylä bend’ was where the largest number of civilians was caught up in the war and fell into enemy hands.

In the afternoon of 30 November, Finland declared a state of war

In the government’s first meeting at 10am, the ministers still contemplated another alternative to war. Not everyone considered it to be necessary to declare the country to be in a state of war. Measures to make contact with the Soviet Union to initiate negotiations were considered to be more important.