The Winter War marked the start of a transition period in Finnish society that extended to almost all spheres of life. The importance of women and young people in working life grew in cities as well as rural areas. In administrative terms, the state of war remained in effect even after the signing of the peace treaty. The large-scale war in Europe continued. The Continuation War (1941–44) further deepened the transition that had been sparked in Finnish society by the Winter War. 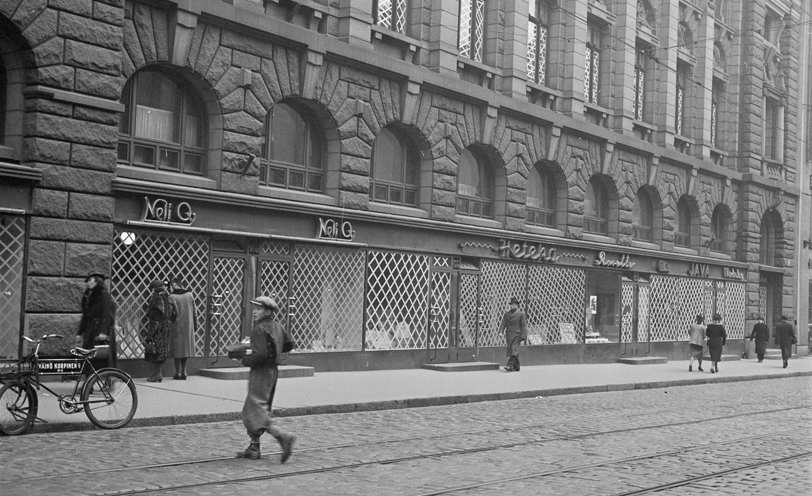 A view of the street of Aleksanterinkatu in Helsinki on 25 October 1939. SA-kuva.

The preparation of the home front for war began in September 1939. In the German invasion of Poland, aircraft had also been used to bomb cities. In Finland, the Headquarters of the Head of Civil Defence issued civil defence orders on 28 September that soon started to become visible on the streets of cities. 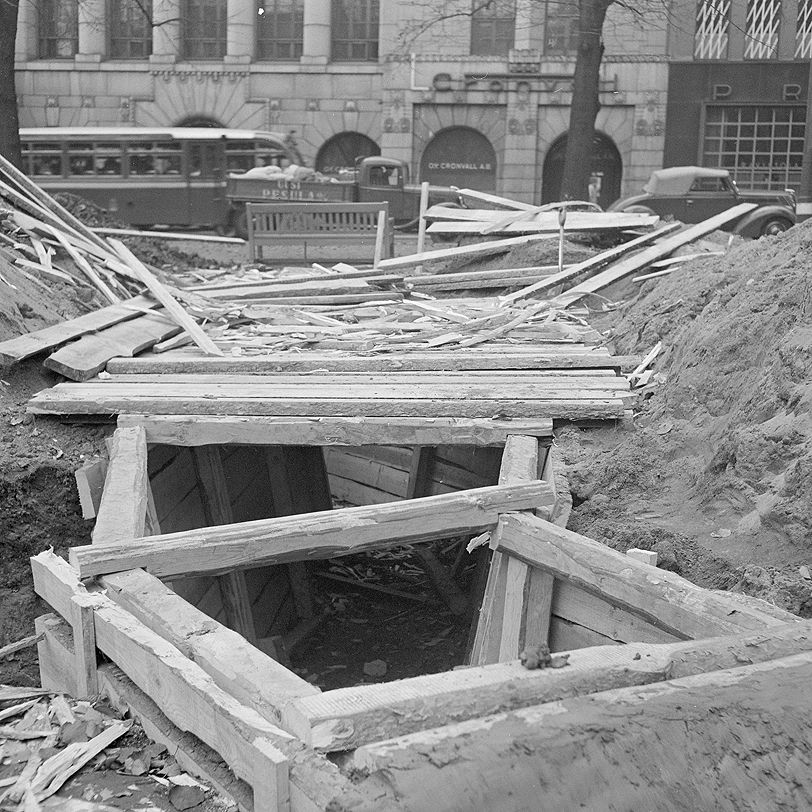 An air-raid shelter under construction in Esplanadi Park. Photo taken on 25 October 1939. SA-kuva.

The construction of air-raid shelters began in parks. Store windows were protected by crisscrossing them with tape or boarding them up. According to the blackout regulations, all buildings had to be able to be blacked out within two hours of the order being issued. This readiness had to be achieved by 17 October.

First signs of the reduced availability of imported goods

The large-scale war that had broken out in Europe also affected the availability of imported goods. The Ministry of Supply was established on 20 September. Its role was to regulate commodities in order to ensure their equal distribution to the population and the Defence Forces. The regulation of sugar started on 7 October, and coffee became regulated at the end of October. The third commodity to become regulated was petrol. No other consumer good was regulated, although not all types of goods were available in sufficient numbers during the Winter War. Soon after the Winter War, the population was forced to become used to the regulation of commodities as well as the variety of ration cards that came with it. 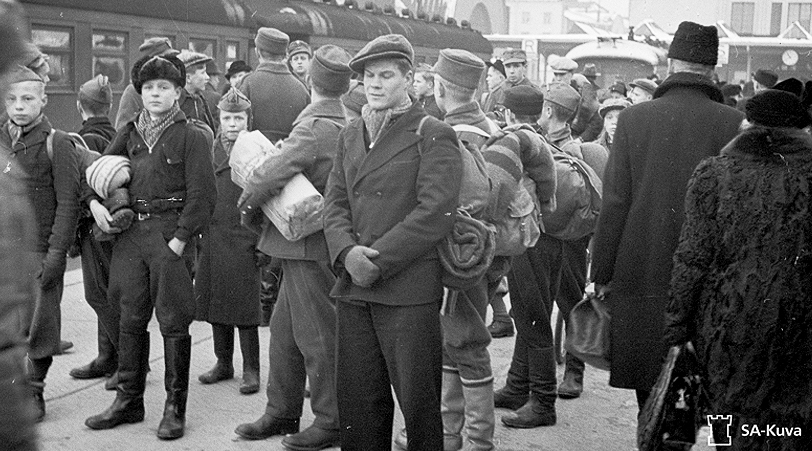 Additional refresher training and evacuations led to a labour shortage

The mobilisation that was carried out in October under the name of additional refresher training (YH) particularly manifested as a shortage of skilled labour. The relocation of the population increased the shortage of labour in certain fields. The decentralisation of the war industry that started in the second half of October increased the need to transfer labour.

Women as part of national defence 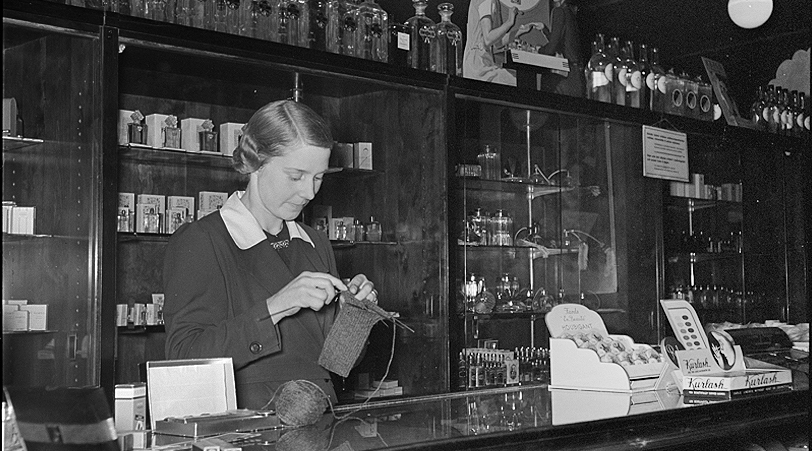 A cashier of the Stockmann department store knitting socks at her workplace on 26 October 1939. SA-kuva.

Women’s desire to participate in the national defence efforts in various roles increased in autumn 1939. Various women’s organisations, with the Lotta Svärd organisation being the largest, were key organisers of voluntary activities.

There were canteens at garrisons whose operation was largely based on voluntary work. The number of personnel required for them increased after the start of the additional refresher training. The increasing of the number of troops to the wartime strength and the concentration of troops to future front lines increased the number of canteens. Some of the new canteens were mobile.

With the majority of young Finnish men called to serve the Defence Forces during the additional refresher training, there was a shortage of labour in both agriculture and industry. In rural areas, women had to perform the duties of both men and women. The shortage of labour in industry was solved by hiring women for traditional men’s occupations. This was also the case in the military industry.

The relocation of people from one municipality to another and the relocation of the people evacuated from the municipalities near the border across Finland made it difficult to organise social services. Another factor that made providing medical care to the population difficult was the large number of medical personnel required by the Defence Forces. 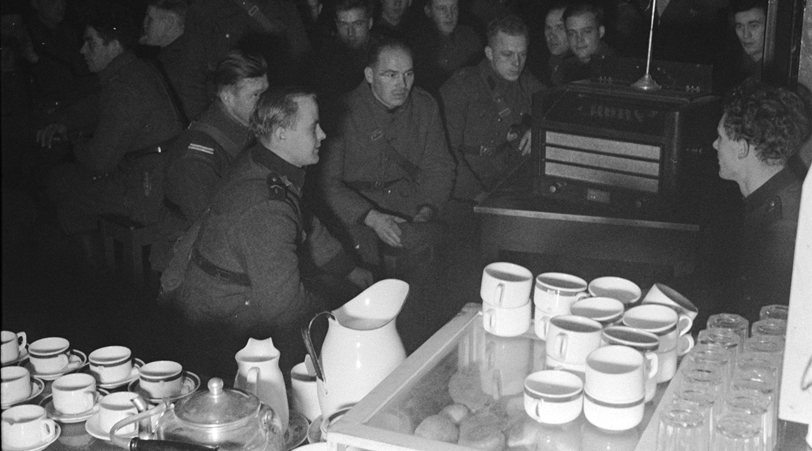 Soldiers listening to the radio at a soldier’s home. Place and date unknown. SA-kuva.

During the additional refresher training, actions were taken to facilitate the communication between the home front and the men in service. Yleisradio, i.e. the Finnish Broadcasting Company, played a key role in these efforts. Its normal news and programmes interested the troops. Because of this, efforts were made to equip each housing location with a radio. 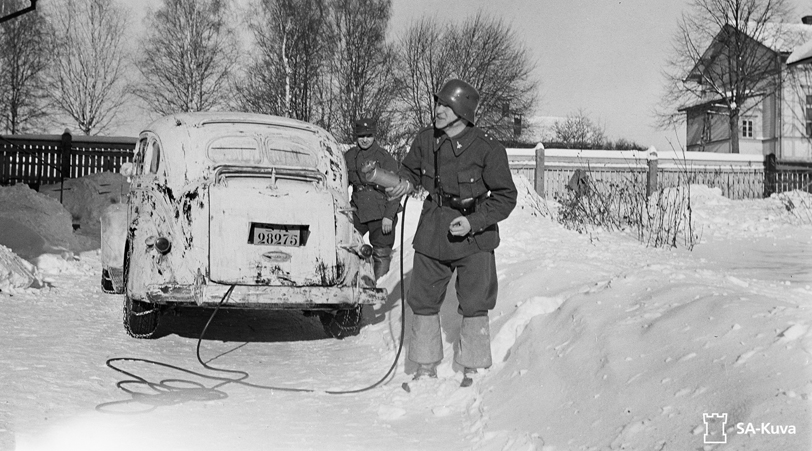 The radio car that visited the troops made its own significant contribution. It kept the home front informed of the lives of the men at their far-away stations. The radio car was operated by radio commentators Pekka Tiilikainen and Enzio Sevón. Tiilikainen commented in Finnish while Sevón did likewise in Swedish. These activities also continued during the Winter War. A functional military mail system played a key role in personal communication. 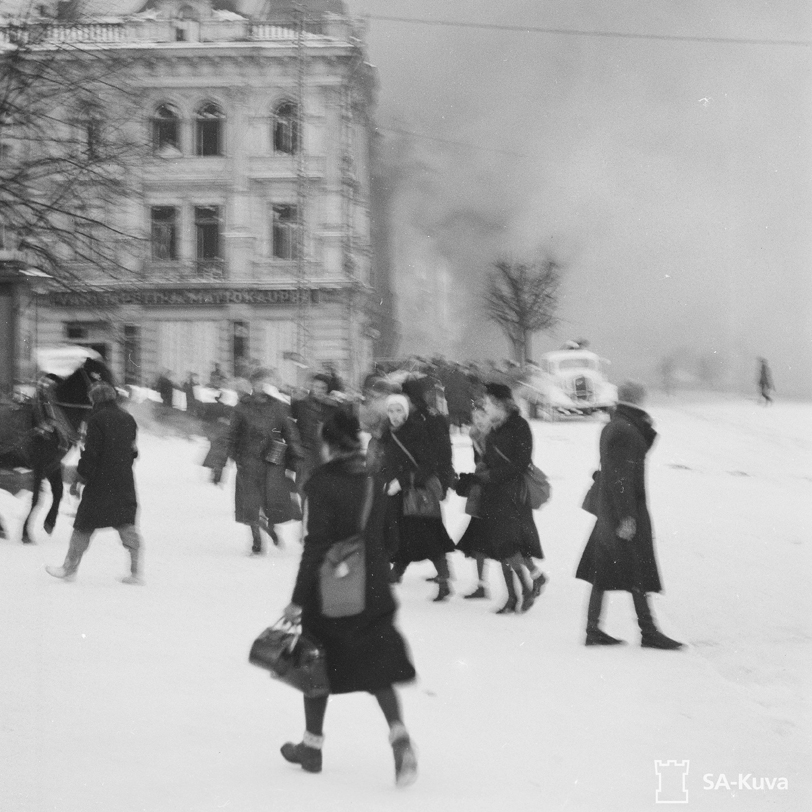 Many localities at the home front gained a concrete feel for the war on the very first day of the war, when Soviet aircraft bombed several Finnish localities, including Helsinki and Viipuri (Vyborg). According to the statistics compiled by civil defence authorities, approximately 900 people were

killed in the air raids, with over 500 wounded seriously and over 1,300 wounded slightly. The number of people killed in Helsinki over the course of the war totalled approximately 100. A significant proportion of them were killed on the first day of the war.

Some of the civilian residents of the area between the Arctic Ocean and Lake Ladoga were caught up in the war. An estimated 2,600 civilians were left behind in the areas occupied by the Red Army. The residents of the ‘Hyrsylä bend’ were the largest single group that could not be evacuated in time. Finnish citizens were also left behind in the occupied areas of Suomussalmi, Kuusamo and Petsamo, among other places.

Many young children and their mothers were sent to Sweden

One part of the aid provided to Finland by Swedish non-governmental organisations was the evacuation of Finnish children and mothers of young children to Sweden. One of the main organisers of this aid was Maja Sandler, wife of Swedish Foreign Minister Rickard Sandler, who was later forced to resign from the government. During the Winter War, almost 5,500 children, over a thousand mothers and 175 elderly people were transported to Sweden. Approximately two hundred of the people evacuated to Sweden were transported further to Norway and Denmark, with each country receiving approximately a hundred people.

Dates related to the operations at the home front