The positive publicity given to Finland during the Winter War waned after Finland signed a peace treaty with the Soviet Union. The Western powers felt that it was a loss of prestige to them and interpreted the peace treaty as Finland’s surrender. Finland was more isolated than ever after the war. Gaining the support of the Western powers was thereafter out of the question for Finland. Neither would Sweden provide military assistance to Finland. The peace treaty had not erased the threat posed by the Soviet Union; rather, it appeared that the Soviet Union would attack again, given a suitable opportunity.

The Winter War shattered the foundation of Finland’s defence strategy, which had been in place throughout Finland’s independence until that point. According to this strategy, the main purpose of the Finnish Defence Forces in wartime was to win enough time for Western military assistance to reach the front line. In 1972, Jukka Nevakivi published a study on the military assistance provided by the United Kingdom and France and titled it ‘Apu jota ei pyydetty. Liittoutuneet ja Suomen talvisota 1939–1940’ (The Assistance that Was Not Requested. The Allies and Finland’s Winter War 1939–1940). In 2000, Nevakivi published a supplementary study that was based on new archival sources. The key result of the study is apparent from its name: ‘Apu jota ei annettu. Länsivallat ja Suomen talvisota’ (The Assistance that Was Not Provided. The Allies and Finland’s Winter War).

There was no time to develop warfare skills and tactics

The development of warfare skills and tactics was no longer a priority after the Winter War. Following the war, the reorganisation of the army also led to the reorganisation of the entire peacetime system. This major workload was considered to require all available active officers to carry out. They were also needed as trainers for the grown peacetime army. Some of the officers who had returned to civilian life before the Winter War were called back to service, yet it was still not enough. The military deemed that the operations of the General Staff College, which had been halted in October 1939, could not be restarted. Abandoning the training of general staff officers during the Continuation War (1941–44) also proved to be fatal for the development of Finnish warfare skills during the Second World War.

The field army was increased to 16 divisions

New military units could be adequately equipped during the war. Among other units, two entirely new divisions were transferred to the field army. According to post-war estimates, the full number of available conscripts enabled the establishment of 16 divisions for a wartime field army. The Winter War proved that the exemption of a significant number of conscripts from conscription had been a mistake.

A second large miscalculation was made in assessing the importance of the terrain in the area between the Arctic Ocean and Suojärvi (Suoyarvi). The almost 1,000-kilometre-long section of the front line was left to the responsibility of separate battalions that were concentrated near roads. The basis for this strategy was the notion that the terrain in these areas was unsuitable for large military units, i.e. divisions. A significant number of new troops had to be concentrated in the area. In the aftermath of the war, the number of peacetime and wartime troops deployed in the area between the Arctic Ocean and Ilomantsi was increased significantly, into an army corps with two divisions.

The peacetime army was deployed to the eastern border

Despite the considerable spoils of war and the materiel that had been purchased during the war (but which had not arrived in Finland until after it), arming the new field army proved to be problematic. According to the experiences gained from the Winter War, the divisions required more heavy artillery as well as anti-aircraft and anti-tank weapons. The spreading of the war to Denmark and Norway in April 1940 and to western Europe in May 1940 made it more difficult to purchase materiel. More and more countries restricted the sale of weapons to other countries.

Following the signing of the peace treaty, the Western Allies began to demand that Finland return the weapons they had sent, and they even intended to stop the delivery of weapons Finland had purchased. From the perspective of the United Kingdom and France, the military reinforcement of Finland was not sensible. After all, it was a possibility that any weapons delivered to Finland would end up in the hands of the Soviet Union if it made another attempt to conquer Finland. Sweden expanded its own wartime army. It restricted the capability of its weapon industry to sell weapons to Finland. Soon after the signing of the peace treaty, Sweden demanded that Finland return some of the weapons delivered to it by Sweden during the Winter War.

When Finland transitioned to peacetime in March 1940, the future could only be speculated. Soon after the signing of the peace treaty, People’s Commissar for Foreign Affairs Molotov stated that the Soviet Union considered the peace treaty to have resolved all issues it had with Finland. From Finland’s perspective, the biggest problem was that the Moscow Peace Treaty had not eliminated all conflicts between the two countries despite Molotov’s claim. The Soviet Union continued to make new demands to Finland, citing the peace treaty. There were many signs in the air that pointed towards the Soviet Union preparing to resolve the ‘issue of Finland’ once and for all.

Disagreements over interpretation were fatal to many soldiers

The first actual disagreement over the interpretation of the peace treaty pertained to the exact location of the border. The matter was resolved according to the Soviet Union’s will. Enso (Svetogorsk) and its industrial facilities were ceded to the Soviet Union, and Finland agreed to cover the loss of movables taken away from the ceded areas. Before the border’s exact location was specified, the Soviet Union arrested dozens of Finnish soldiers who it believed had trespassed into Soviet territory by mistake. Despite active efforts, the majority of them were never returned to Finland according to Paasikivi. I have not found any source that would contain information on the subsequent fates of these Finns.

Finland could also speculate upon the Soviet Union’s ultimate goals based on the changes that took place in Soviet Karelia. On 31 March 1940, the Supreme Soviet of the Soviet Union approved the decision to found the Karelo-Finnish Soviet Socialist Republic. A few days earlier, Finnish had become an official language in the republic. Documents had to be prepared in either Finnish or Russian. A state university was founded in Petrozavodsk that taught its classes in Finnish. The republic was to start publishing a newspaper in Finnish on 10 April 1940. The Finnish-language radio broadcasts in Petrozavodsk were part of the Soviet Union’s anti-Finnish propaganda warfare.

The Soviet Union rejected the idea of a Nordic defence alliance

The key question with regard to the military defence of Finland was whether military assistance could be guaranteed. Finland had already inquired after Sweden’s stance on a Nordic defence alliance during the final phase of the Winter War. The decision-makers in Finland anticipated that committing Sweden in particular to Finland’s defence would diminish the Soviet Union’s aspirations to conquer Finland. In March 1940, the Soviet Union deemed the negotiations initiated by Finland regarding a Nordic defence alliance to go against the peace treaty.

The peace treaty did not change Germany’s stance towards Finland

The details of the secret protocol of the Molotov–Ribbentrop Pact of August 1939 were still not known in Finland at the end of the Winter War. However, it had become clear to the government and military command that Germany and the Soviet Union had made an agreement on some type of spheres of influence. In this agreement, Finland clearly belonged to the Soviet Union’s sphere of influence. During the war, Germany was indifferent to all appeals made by Finland and refused to act as its mediator. The peace treaty in no way changed Germany’s stance towards Finland.

The government and military command of Finland had inconsistent intelligence on the possible spheres of influence agreed upon by Germany and the Soviet Union. One assessment stated that in the event of the Soviet Union conquering Finland, Germany would gain possession of some of the western parts of the country, at the very least the Åland Islands. This information has since then been proved to be incorrect. According to the Molotov–Ribbentrop Pact, Finland belonged to the Soviet Union’s sphere of influence in its entirety.

The German invasion of Denmark and Norway in April eliminated even the theoretical possibility of Finland receiving Western assistance. The final nail in the coffin was the withdrawal of the Allied forces that had fought against the Germans in Northern Norway in June 1940. Finland’s maritime routes west from the Baltic Sea were monitored by Germany, while the traffic to and from Petsamo was monitored by the Western powers, Germany and in part the Soviet Union.

Germany became the only option available to Finland

At the beginning of summer 1940, it seemed that Finland would find no support anywhere. In practice, the United Kingdom was the only Western power left. Receiving military assistance from it was not even possible in theory. Sweden’s negative stance towards providing military assistance to Finland during the Winter War had not changed. The Soviet Union considered a defence alliance between Finland and Sweden to be against the peace treaty. In Paasikivi’s words, Germany was a thousand times better an option than ending up deeper within the Soviet Union’s sphere of power. In summer 1940, Finland increased its effort to establish a connection with Germany. At first, even this road seemed to be blocked.

The Finnish president was replaced in December 1940 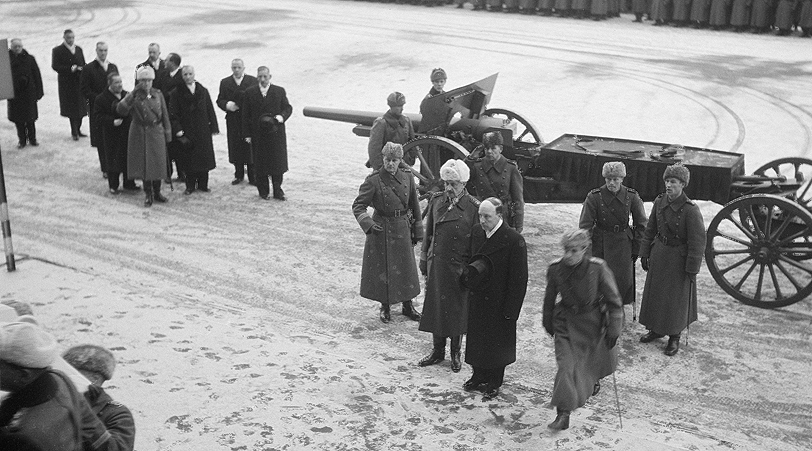 President Risto Ryti and Commander-in-Chief Gustaf Mannerheim watch as the coffin of President Kyösti Kallio is transferred from a gun carriage to a train at the Helsinki Central Railway Station in December 1940. Kallio was buried in his home town of Nivala. SA-kuva.

President Kyösti Kallio announced in November 1940 that he was resigning the presidency due to health reasons. Parliament enacted a constitutional amendment that allowed the electors of 1937 to elect the next president. They chose Risto Ryti as the new president of Finland. On the day of his departure to his home town of Nivala, President Kallio suffered a heart attack at the Helsinki Central Railway Station and died.