The Finnish peace delegation signed a peace treaty in Moscow under the authorisation of the Finnish government. It was dated 12 March 1940, even though the day had already changed. The treaty comprised three documents. The text section of the treaty was short. The borders were drawn on a map. The thick drawn line caused some disagreements over its interpretation. The protocol annexed to the treaty detailed the implementation of the treaty.

The government approved the peace treaty on 12 March

In a session held on 12 March, the Finnish government authorised the Finnish peace negotiation delegation that was in Moscow to sign a peace treaty. The delegation signed the treaty in the early hours after midnight.

A clear majority of the government was in favour of the treaty. The peace treaty was opposed by Minister of Defence Juho Niukkanen and Minister of Education Uuno Hannula. 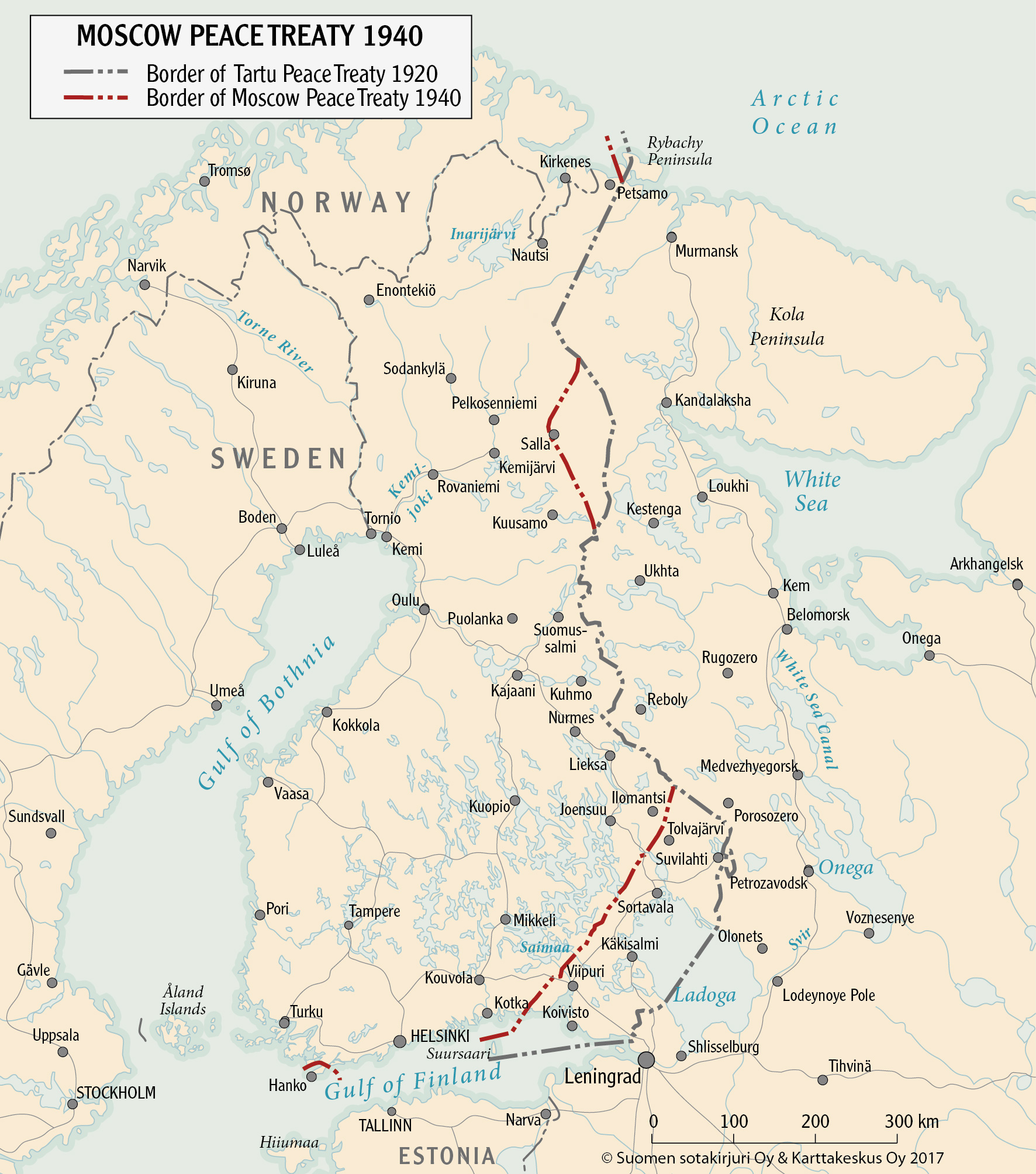 The peace treaty also ordered Finland to cede areas which the Soviet Union had been unable to conquer during the war. All the ceded cities – Viipuri (Vyborg), Käkisalmi (Priozersk) and Sortavala – were in the possession of the Finns when the peace treaty came into effect. In accordance with the peace treaty, the Soviet Union returned to Finland the area of Petsamo, which it had conquered during the war, excluding the Srednisaarento (Sredny) Peninsula and the Kalastajasaarento (Rybachy) Peninsula. The Srednisaarento Peninsula was called Pummanki in Finland.

The text defined the ceded areas in general terms

The new borders were defined in Article 2 of the treaty as follows: ‘The new national border between the Republic of Finland and the USSR shall be drawn so that the USSR will annex the entire Karelian Isthmus, the city of Viipuri and Vyborg Bay with its islands, the western and northern coastal region of Lake Ladoga, the cities of Käkisalmi and Sortavala as well as the central village of Suojärvi, a group of islands in the Gulf of Finland, the area east of Märkäjärvi, the central village of Salla as well as a section of the Kalastajasaarento and Srednisaarento Peninsulas – in accordance with the map annexed to this treaty.’

The map was drawn in such a small scale that the line drawn across it covered an area that was approximately two kilometres in width. This allowed for two different interpretations of the border. The biggest disagreement over the interpretation pertained to Enso, which was located next to Imatra. There was important wood processing industry in the area. Enso is now known as Svetogorsk in Russia. The disagreements over the precise alignment of the border in the terrain were resolved according to the Soviet Union’s will. The central village of Värtsilä (Vyartsilya) was also left on the Soviet side of the border.

The Soviet Union returned the Petsamo area to Finland

In Article 4 of the treaty, the Soviet Union agreed to withdraw its forces from the Petsamo area. It was the only area from which the Soviet forces were forced to retreat from under the peace treaty. The treaty ordered Finland to comply with the military restrictions that had been imposed on the Petsamo area in the Treaty of Tartu (1920). Article 5 allowed special rights related to access and trade to Soviets.

The treaty only comprised nine articles

A protocol that was appended to the treaty and signed on the same day stated that hostilities would cease at 12 noon Leningrad time, i.e. 11am Finnish time, on 13 March. Finland was required to withdraw its forces one kilometre away from the front by the end of the first day. The forces had

to begin their withdrawal to the new border between the Gulf of Finland and Lieksa at 10am Leningrad time on 15 March 1940 and a day later at the front between Lieksa and the Arctic Ocean. The forces had to withdraw no less than seven kilometres each day. All Finnish forces had to withdraw behind the new border by 8pm on 26 March. The Red Army had to exit Petsamo by 10 April.

Destruction of property was banned in the ceded areas

The protocol ordered the military leadership of both parties to make sure that ‘cities, localities and establishments of defensive and economic importance (bridges, dams, airfields, barracks, storehouses, railway communications, industrial plants, telegraphs, electric power plants) shall be preserved from damage and destruction’.

The Soviet Union later interpreted this section of the protocol to mean that Finland had to restore the factories and plants in the ceded area and the Hanko Peninsula to the same condition they were prior to the Winter War. In contrast, the Finns interpreted the protocol’s text to mean that the areas had to be in the condition they were in on 13 March 1940. Finland was forced to yield to the Soviet Union’s interpretation. However, the Soviet negotiator did yield to the Finns not being required to repair damage caused by Soviet bombers.

The last section of the protocol was a statement according to which the exchange of prisoners of war would be carried out in the briefest possible time after the cessation of hostilities on the basis of a special agreement.

The terms for the exchange were negotiated in Viipuri in April. Most of the exchanges of prisoners were carried out in May, with the final exchanges concluded by 7 June 1940. Almost 850 prisoners of war were returned to Finland, with a little less than 5,500 returned to the Soviet Union in return.

The return of the almost 2,500 civilians who had been caught up in the war in the areas conquered by the Soviet Union started at the end of May. The last group was returned on 3 June.

Ryti’s government gave up its seats on 27 March 1940. The majority of the members of the Winter War-era government continued in the new government formed under Ryti. In addition to Niukkanen and Hannula, J. K. Paasikivi and Minister of Justice J. O. Söderhjelm also left the government, with Paasikivi becoming the envoy to Moscow. Väinö Tanner, who had acted as the minister for foreign affairs in Ryti’s previous government, was now appointed the minister of supply. Rolf Witting, a bank manager and former professor, was appointed the new minister for foreign affairs.