Lotta Svärd was the sister organisation of the Civil Guard, with an all-female membership. Lotta Svärd had prepared for military defence by training Lottas for medical, provisioning, equipping, office and fundraising duties. Shortly before the war, some of the Lottas from the fundraising division were trained as air surveillance and signal Lottas. The provisioning division had the largest number of Lottas. In practice, they were in charge of supplying provisions to the troops and departments under the Home Troops, among other things. The majority of the air surveillance Lottas worked as observers at air surveillance stations.

‘The purpose of the Lotta Svärd organisation is to promote and strengthen the ideology of the Civil Guard organisation and assist it in safeguarding religion, home and the fatherland.

The “Lotta-Svärd” organisation shall realise this mission by

• working to raise the nation’s will to defend itself and the Civil Guard organisation’s moral condition;

• aiding in providing provisions to the Civil Guard units;

• aiding in the procurement of equipment for the Civil Guard units;

Structure of the Lotta Svärd organisation 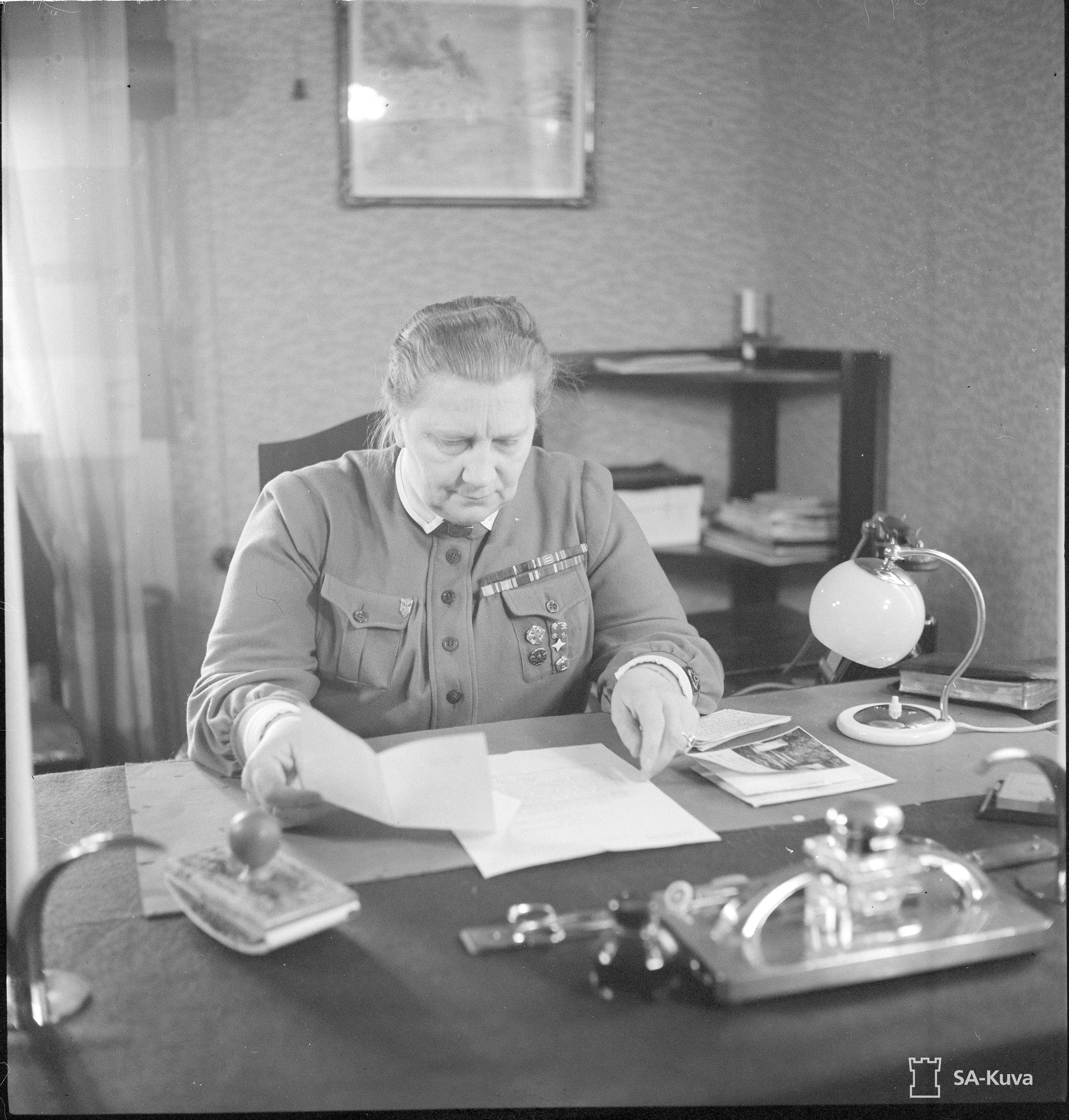 Fanni Luukkonen, the chair of the Board of Directors of the Lotta Svärd organisation, at her desk. SA-kuva.

Number of members in the organisation

The Lotta Svärd organisation had a total of 105,000 members at the beginning of 1939. This number comprised almost 85,000 actual members, i.e. active Lottas, and a little under 20,000 supporting members. Approximately half of the actual members worked in the Provisioning Division.

The organisation comprised 22 Lotta districts. There were a little under 700 local associations and approximately 1,700 village branches. The last-mentioned were established in villages by the local associations.

Total work contribution of Lottas during the Winter War

Medical Lottas during the additional refresher training and the war 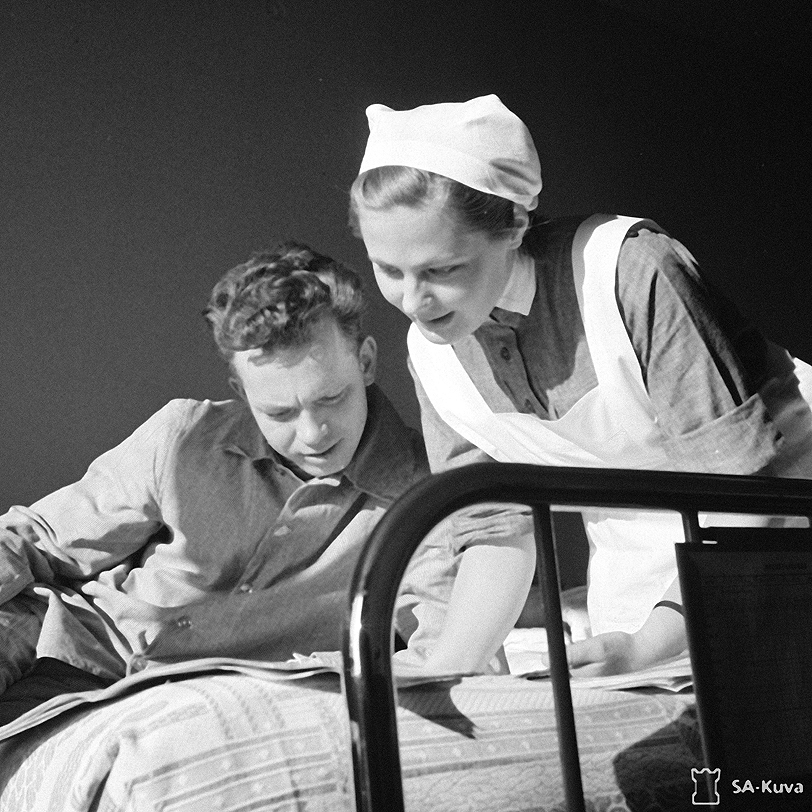 The Medical Division of Lotta Svärd set up eight field hospitals and nine field hospital wards during the mobilisation, which was called additional refresher training. The Finnish Red Cross set up another eight field hospitals. The two organisations were at first in disagreement over the placement of Lottas who had training in nursing. Lotta Svärd was assigned 200 nursing Lottas. At the start of the war, the organisation had 250 people who had completed a six-month-long assistant nurse course.

Approximately 7,000 of the Lottas in the Medical Division primarily worked in field and war hospitals. The majority of them had only completed short training courses. These medical Lottas performed a variety of assistance tasks, such as washing and repairing the clothes of wounded patients.

Provisioning Lottas were the most numerous 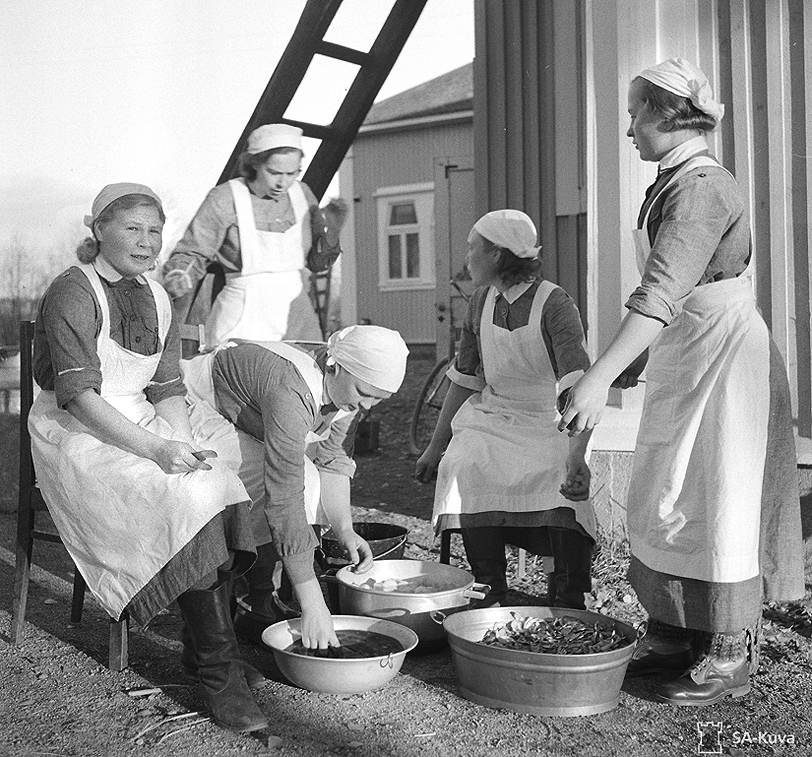 Provisioning Lottas peeling potatoes at the corner of the Heinjoki Civil Guard Building on 1 October 1939. SA-kuva.

In summer 1939, provisioning Lottas were in charge of supplying provisions to the volunteers who participated in the fortification of the Karelian Isthmus.

The provisioning Lottas of the Provisioning Division were in charge of supplying provisions to the troops who participated in the additional refresher training at the troops’ establishment locations. Provisioning Lottas already had Lotta canteens, which they had set up in different localities in peacetime for fundraising purposes. More canteens were also set up near the front during the war.

During the war, the Provisioning Division’s duties were performed by over 35,000 Lottas. Many of the division’s Lottas also worked in their home localities. At the start of the Winter War, the provisioning Lottas took care of the supplying of provisions to the higher headquarters, logistics facilities at the home front, depots, field hospitals, field hospital wards, hospital trains and troops manning the fortifications, among others.

A little less than 18,000 Lottas were deployed as equipment Lottas, with over 3,500 of them deployed within the theatre of war and over 14,000 at the home front.

New operating areas of the Fundraising and Office Division

During the war, a little less than 7,400 Lottas engaged in the traditional work of the Fundraising and Office Division, with approximately 5,500 of them at the home front and a little less than 1,900 within the theatre of war. The division’s Lottas primarily performed office work at different headquarters. Others worked at logistics facilities and depots, among other locations. 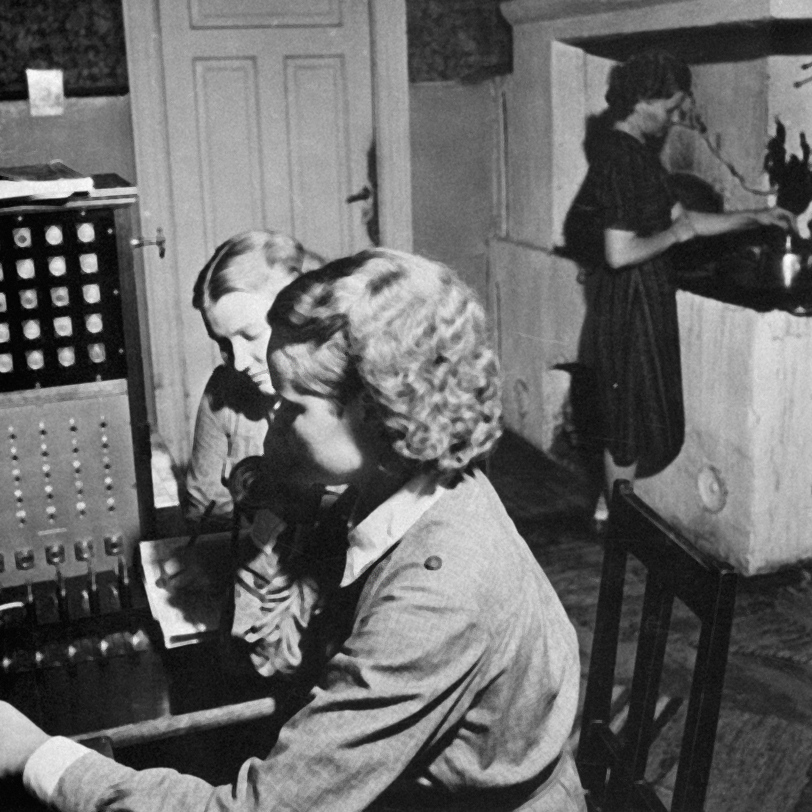 The Fundraising and Office Division also included air surveillance and signal Lottas, who had completed special training. Almost 10,500 Lottas worked in air surveillance, with over 7,400 of them working at the home front and a little more than 3,000 within the theatre of war.