Approximately 1,000 people were killed in air raids on the home front during the Winter War. Soviet aircraft bombed almost 700 localities. Bombing the home front was a new aspect of European warfare. The first experiences of it came from the Spanish Civil War (1936–39). The state authorities did not begin their civil defence preparations until the 1930s. Prior to this, civil defence preparations were handled by the Finnish Anti-Gas Defence Organisation.

The Finnish Anti-Gas Defence Organisation was founded in 1927

Within the military, the first orders to military districts regarding the drafting of civil defence plans were issued on 23 April 1933. At the proposal of the Ministry of the Interior, the Finnish Government appointed a committee on 15 February 1935 to prepare proposals ‘on air defence measures at the home front that belong to the civilian authorities’ area of responsibility and mean protecting the civilian population from aerial attacks’. The committee submitted its memorandum on 3 March 1938.

On 29 September 1938, the Finnish Government appointed Lieutenant General Aarne Sihvo as head of civil defence at the Ministry of the Interior. On 14 January 1939, the Headquarters of the Head of Civil Defence was established as his management body. The State Civil Defence Centre, which had been in charge of developing civil defence readiness since 1937, was simultaneously disbanded. The Finnish Anti-Gas Defence Organisation had continued its activities alongside this government body, with an emphasis on promoting citizen awareness.

The government’s first bill on civil defence fell through

In March 1939, the government submitted a bill for a civil defence law. According to the bill, the purpose of civil defence was ‘to protect the population and the property of the state, municipalities and private institutions as well as other property from aerial attacks by an enemy or limit and mitigate the impacts of such attacks’. According to the bill, the civil defence obligation would apply to all citizens aged 16 to 60. In addition to wartime, the civil defence obligation referred to in the bill would also apply to peacetime, when any individual to whom this obligation applied could be ordered to participate in civil defence duties for up to 36 hours per year. The processing of the bill was prolonged in Parliament, and the bill was left on the table at the end of the parliamentary term.

Civil defence legislation came into effect at the last moment

On 15 June 1939, the government set a new committee to prepare a bill. The committee changed its previous bill by making the peacetime civil defence obligation voluntary, among other things. The law was divided into two parts. The Finnish president signed the government bill on civil defence as well as the bill on civil defence measures to be taken by private individuals and the costs of such measures on 22 September. A large-scale war had already broken out in Europe in the first days of September, with Germany invading Poland on 1 September 1939. The United Kingdom and France had declared war on Germany on 3 September. Parliament quickly processed and passed both bills. President Kallio signed both acts at the Finnish Government on 30 October 1939, and they came into effect on 15 November 1939.

On 14 October 1939, the Finnish Anti-Gas Defence Organisation was ordered to carry out its assigned establishing duties in connection with the additional refresher training, i.e. mobilisation. On the same day, the reservists assigned to wartime civil defence duties were ordered to report to service.

An order was issued on blackout preparations on 15 October 1939 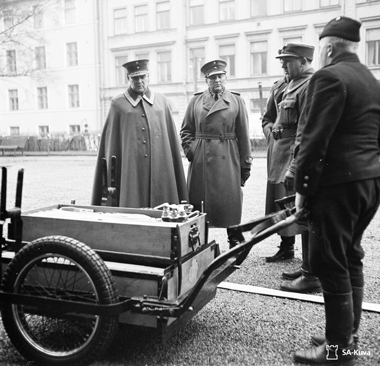 1939. The preparations were to be made so that buildings could be blacked out within two hours of midnight on 17 October. Most municipalities held a blackout drill prior to the start of the war.

Alert systems and their inspection

The civil defence authorities were responsible for alerting the population to air raids. The alerts about approaching enemy aircraft were issued by regional air defence centres (RADC), which were under the Finnish Air Force. The provincial civil defence inspector was obligated to inspect the alert system. Within localities, it was important for the population to know which regional air defence centre would alert them to approaching aircraft. Communication channels also had to be inspected.

Instructing civil defence after the start of the war

The head of civil defence issued orders and conveyed reports from the Headquarters of the Head of Civil Defence to the provincial civil defence inspectors. The first report is dated 3 December 1939. It contained information on the bombs used by the enemy.

In his first wartime order, dated 4 December 1939, Sihvo ordered the provinces to provide the Headquarters of the Head of Civil Defence with situation reports on bombings immediately after they had taken place. He simultaneously ordered all civil defence management bodies to switch to having people on duty at all times.

In his next order, issued on 29 December, the head of civil defence provided more detailed regulations on conduct during an air alert. He also demanded for air defence discipline to be enhanced. When an air-raid alert was issued, people would not immediately go to an air-raid shelter. Some would even stay to watch the air raid. In the countryside, people had to be prepared to protect themselves from machine gun fire from enemy aircraft by camouflaging themselves. For this purpose, they had to carry a large piece of white fabric with them, such as a bed sheet.

The continuous air-raid alerts and the resulting need to take cover disrupted the operations of the ordnance industry. On 29 December, the head of civil defence ordered that factories were to only halt their operations if the factory area was in imminent danger. This alert was issued by the factory’s own air defence personnel.

The Finnish Anti-Gas Defence Organisation manufactured gas masks for the civilian population. Chemical test facilities in Vaasa and Tampere had the capability to run analyses on samples. On 31 December, the head of civil defence ordered for civil defence field laboratories to be established in Helsinki, Turku, Kuopio, Oulu and Kemi. However, the personnel’s training took so long that the laboratories were not ready for operation until the final phase of the war. 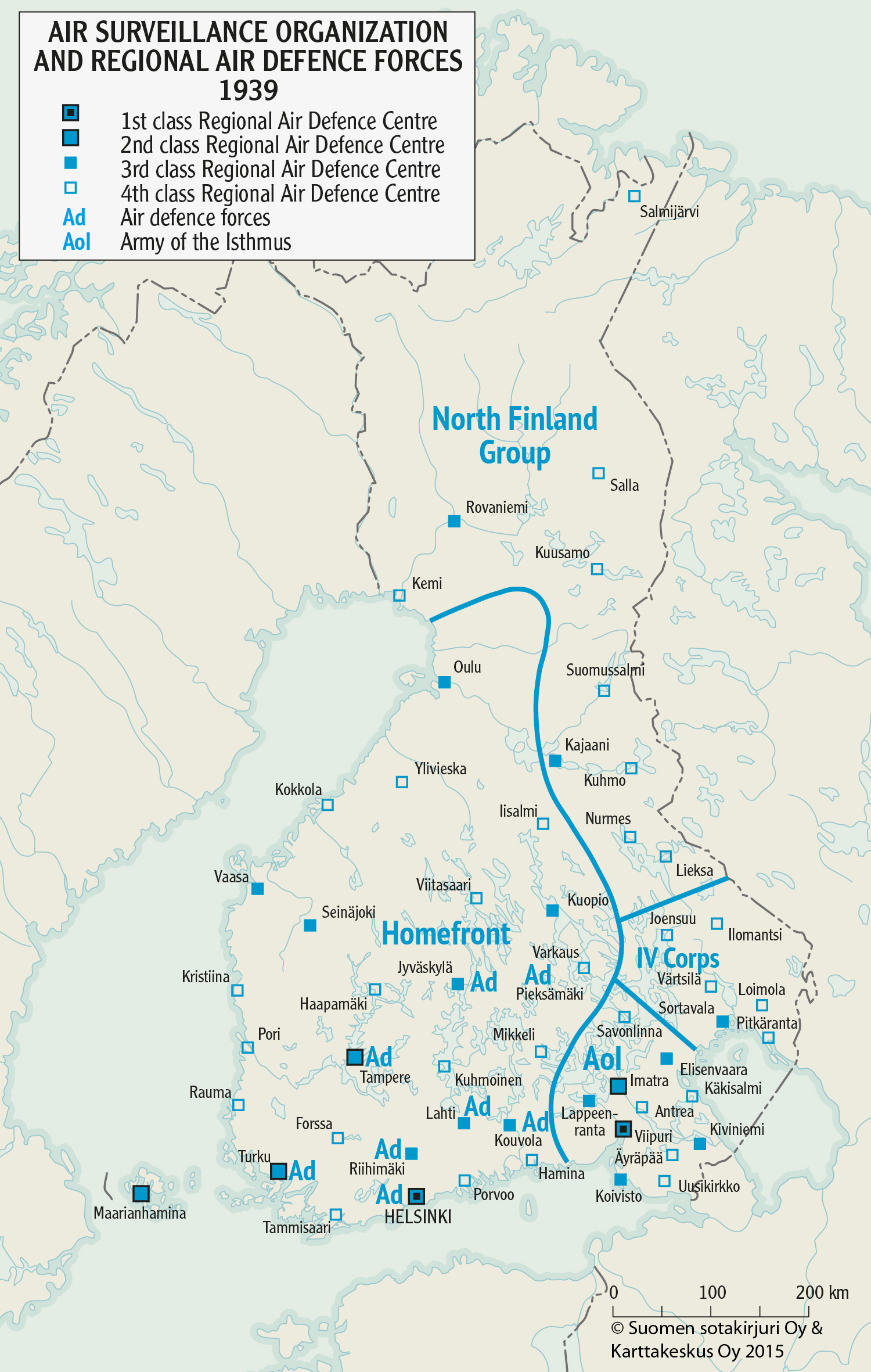 The areas of operation of the Army of the Isthmus, IV Corps, Group Talvela, North Finland Group and Lapland Group were referred to as theatres of operations. They extended deep into the rear of the front. The Ministry of the Interior was also in charge of civil defence in localities at the formations’ rear. On 19 January 1940, the Finnish Government ordered the civil defence within the theatres of operations to be subordinated to the formations that were in charge of the area in question.

The training of bomb disposal officers started in December

Some of the bombs dropped by the enemy were duds, i.e. failed to explode. They had to be disarmed to avoid damage. The training of personnel for this task started in December. The first bomb disposal course, held from 12 to 13 December, was attended by 19 people from 16 different localities. More courses were later held in Jyväskylä, Lahti and Turku. A total of 94 bomb disposal officers finished their training during the war.

Air raids during the Winter War 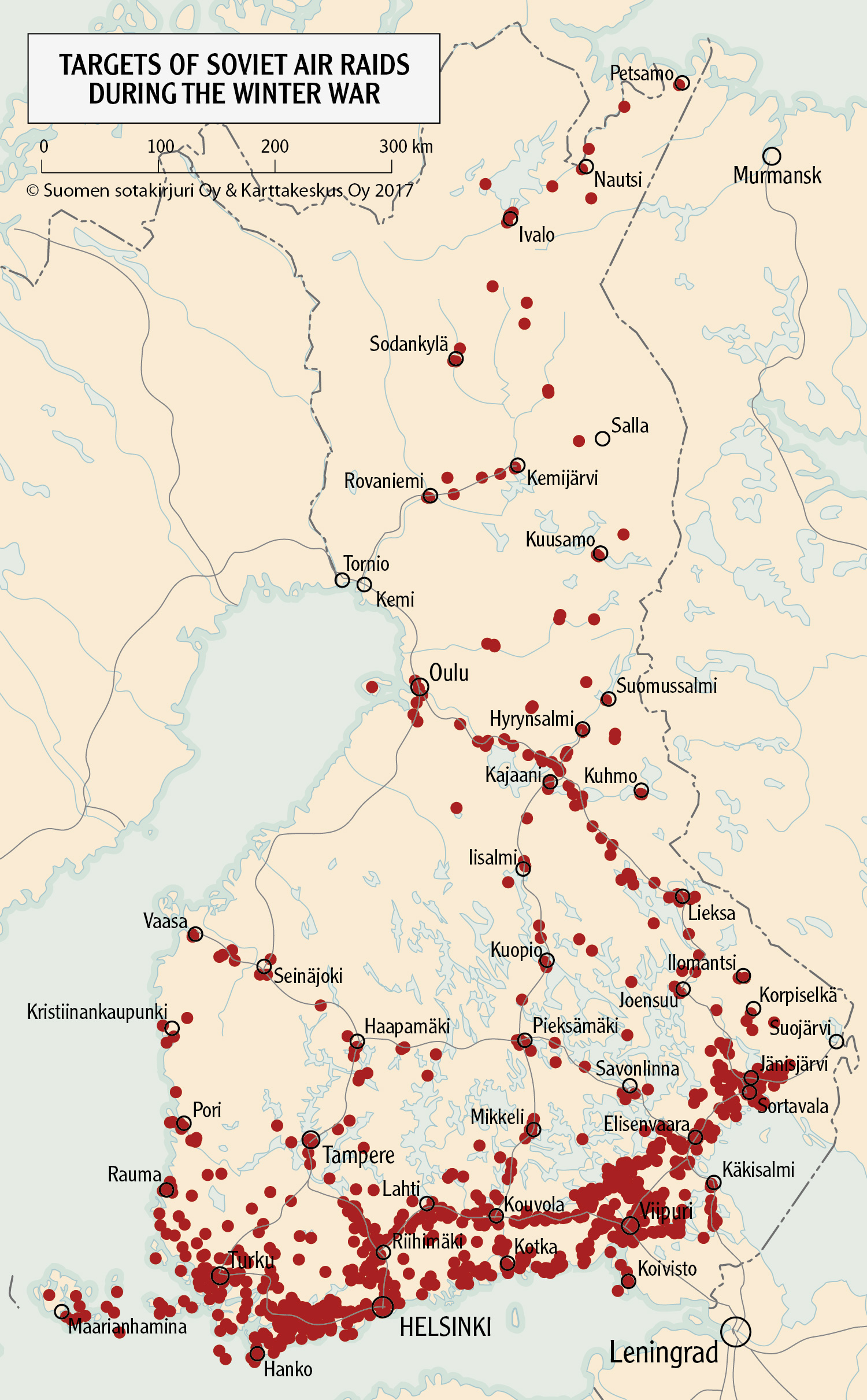 According to statistics compiled during the Winter War, almost 700 localities were bombed during the war. The number of air raids recorded was over 2,700. It is estimated that 55,000 of the almost 100,000 bombs were explosive bombs while over 40,000 were incendiary bombs. The total number of recorded machine gun attacks by enemy aircraft was 440, including both separate attacks and attacks performed in connection with bombings. A little less than a thousand people were killed in air raids during the Winter War. These statistics vary slightly between different authorities.

Fatalities caused by the air raids

Many of the wooden buildings in Mikkeli were destroyed in an air raid by the Red Army’s Air Force on 5 January 1940. Photo taken on Mikonkatu. SA-kuva.

The largest number of fatalities from a single air raid was recorded in Helsinki on 30 November. The fatalities were caused by the second bombing of the day, which took place in the afternoon. The all-clear signal for the previous bombing had been sounded shortly before the next one, so the city’s residents were caught by surprise. Approximately 100 people were killed in the bombings of Helsinki on the first day of the war.

The second largest number of fatalities from bombings on a single day was recorded in Iisalmi on 17 February 1940. The bombings killed 41 people, of whom 28 died due to a bomb hitting an above-ground air-raid shelter. Mikkeli was bombed in three waves on 5 January 1940. The first bombing began suddenly. 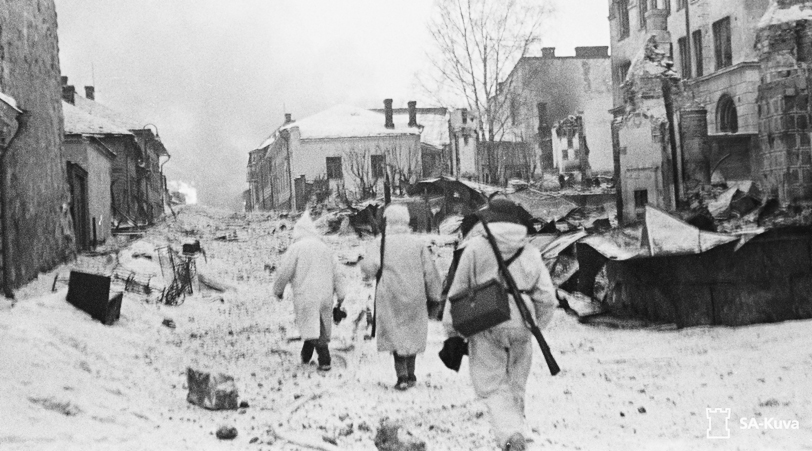 The location that suffered the worst damage in the bombings was Viipuri (Vyborg), located within the theatre of war. At the home front, almost 500 buildings were destroyed or damaged in Lappeenranta, almost 400 in Lahti and over 300 each in Turku and Riihimäki, according to statistics.