Crumbling of world peace in the 1930s

The agreements made in the 1920s, after the First World War, for the purpose of ensuring world peace lost their meaning in the 1930s. The actions taken by the League of Nations to reach peaceful resolutions in China, Abyssinia and Spain were unsuccessful. The National Socialist German Workers’ Party’s rise to power under Hitler’s leadership in Germany in 1933–34 elevated Germany into an even bigger threat to the Western powers than the Soviet Union. In 1935, Germany withdrew from the Treaty of Versailles, which had been signed in

Faith in the League of Nations waned

Japan, one of the original signatory states of the Kellogg–Briand Pact, which had renounced war as an instrument of national policy, launched military operations in China in September 1931. The League of Nations unsuccessfully demanded that Japan withdraw from the areas it had occupied. Japan left the League of Nations in 1933.

At the end of October 1922, fascists, led by Benito Mussolini, rose to power in Italy. He was appointed prime minister. In January 1925, Mussolini became a dictator. With the exception of the National Fascist Party, all other parties were outlawed. Italy was a member of the League of Nations and one of the signatory states of the Kellogg–Briand Pact. Despite this, Italy invaded Abyssinia (now Ethiopia) in 1935. The war ended in the occupation of Ethiopia in 1936. The League of Nations was unable to prevent the occupation of its member state. The organisation’s inability to prevent the use of violence also became apparent during the Spanish Civil War (1936–39).

The small, neutral European countries began to lose their faith in the League of Nations in the 1930s. These ‘Oslo states’, which included Finland, made a joint declaration in which they retained the right to consider separately in each case whether they would participate in the sanctions set out in Article 16 of the League of Nations.

As grounds for their decision, the Oslo states stated that they considered compliance with the regulations of Article 16 to force them into becoming parties in the conflict. This went against the fundamental goals of these countries. The Oslo states sought to remain neutral during a possible war.

Germany violated the Treaty of Versailles

In Germany, Adolf Hitler rose to power in March 1933. President Paul von Hindenburg died in August 1934, and Hitler subsequently became the leader and chancellor of Germany (Führer und Reichskanzler). The following year, Germany confirmed laws that stripped Jews of their citizenship. This marked the beginning of the persecution of Jews, which aimed to eliminate Jews from Germany.

In 1919, the Allied victors of the First World War signed the Treaty of Versailles with Germany, which was among the defeated nations. Germany violated the treaty in March 1935 by introducing

compulsory military conscription and a two-year conscript service. This did not lead to any concrete countermeasures by the victors.

Germany’s next significant violation of the Treaty of Versailles was the remilitarisation of the Rhineland in 1936. In the Treaty of Versailles, the region had been established as a demilitarised zone. The next clear violation took place two years later, in March 1938, when German forces marched into Austria. The country was annexed (Anschluss) to the Third Reich, Germany.

The great powers bowed to Germany’s will 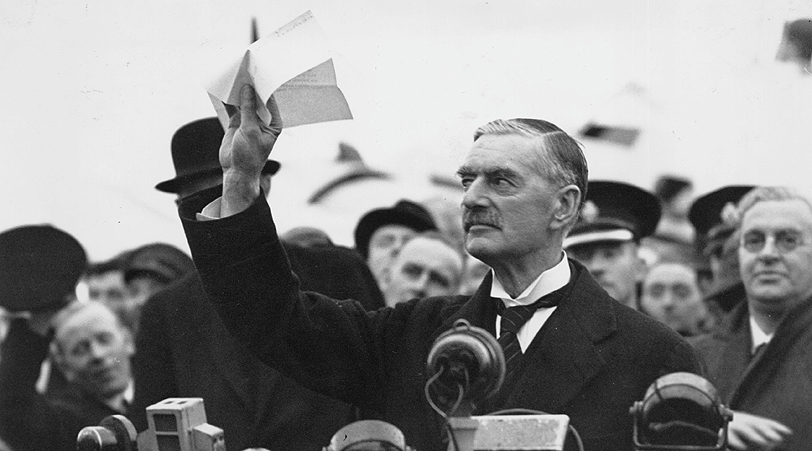 British Prime Minister Neville Chamberlain flew back to England from Munich. At Heston Aerodrome, he held up the Munich Agreement and said that it meant ‘peace for our time’. Image: Central Press/Getty Images.

Next, Germany demanded that the Sudetenland region of Czechoslovakia be annexed to Germany. The region was home to a large German-speaking population. The resulting Czech Crisis was resolved in an international meeting held in Munich in September. In addition to Hitler, the meeting was attended by British Prime Minister Neville Chamberlain, French Prime Minister Édouard Daladier and Italy’s Duce Benito Mussolini.

The agreement made in Munich complied with the German demands. Czechoslovakia was forced to cede the Sudetenland to Germany in October, in addition to which it had to cede a part of Silesia to Poland. The United Kingdom and Germany made a separate agreement to engage in further negotiations in the future. Upon his return from Munich, British Prime Minister Chamberlain declared that the agreement meant ‘peace for our time’.

France earned some raised eyebrows for signing the agreement, as both it and the Soviet Union had signed alliance agreements with Czechoslovakia. The Soviet Union was not invited to the meeting.

Germany lost its credibility as a contractual partner in March 1939

In March 1939, Germany occupied the Czech part of Czechoslovakia. The occupied regions were annexed to Germany as the Protectorate of Bohemia and Moravia. The Slovak Republic was granted nominal independence. Hungary conquered the easternmost part of Czechoslovakia, also known as Carpatho-Ukraine. Hitler lost the last shred of his credibility as a trustworthy contractual partner in the West. The United Kingdom and France declared that they would guarantee Poland’s sovereignty.

The United Kingdom and France negotiated with the Soviet Union

In spring 1939, the United Kingdom and France began negotiations with the Soviet Union regarding military cooperation in the event of war. The Soviet Union demanded the right to send its Red Army troops into its neighbouring countries in the event that they were attacked by Germany. The countries in question made it clear to the Western powers that they were strongly opposed to the idea of allowing Soviet troops inside their territory under any circumstances. However, the Western powers were beginning to bend to these demands. The negotiations were prolonged when the Soviet Union demanded that the Red Army have the right to march into a neighbouring country’s territory also in the event of an indirect attack by Germany. This referred to a situation in which a pro-German government rose to power in a neighbouring country.

The German–Soviet Non-aggression Pact surprised everyone

The negotiations between the Franco–British military negotiation delegation that was sent to Moscow and the Soviet negotiating party barely had time to begin before they broke off. On 23 August, the Soviet Union signed a non-aggression pact with Germany in Moscow. The pact was signed by Soviet Foreign Minister Molotov and German Foreign Minister von Ribbentrop. The pact is known by many names, such as the Molotov–Ribbentrop Pact and the Hitler–Stalin Pact. The secret supplementary protocol to the pact delineated both parties’ spheres of influence, i.e. how the parties intended to divide their neighbouring countries and their territories between them.

The Western powers’ guarantee failed to protect Poland from invasion

The invasion of Poland ended on 6 October. On 28 September, Germany and the Soviet Union amended the pact that they had signed on 23 August with regard to their agreed spheres of influence. Germany gained a larger territory in Poland. In turn, Lithuania was transferred into the Soviet Union’s sphere of influence. On 28 October 1939, the Soviet Union returned to Lithuania the city of Vilnius and its surrounding areas, which had until then belonged to Poland.