The improvement of national warfare skills proved to be more difficult than anticipated in the interwar period in the 1920s and 1930s. The Finnish Army’s warfare skills and strategy, as documented in the standing orders of the rank and file and the infantry between 1927 and 1932, were highly similar to their European models. The influence of German, French and Swedish models is clearly visible in these standing orders. The founding of the Finnish General Staff College in 1924 contributed to the consideration of the Finnish conditions in the development of strategy. 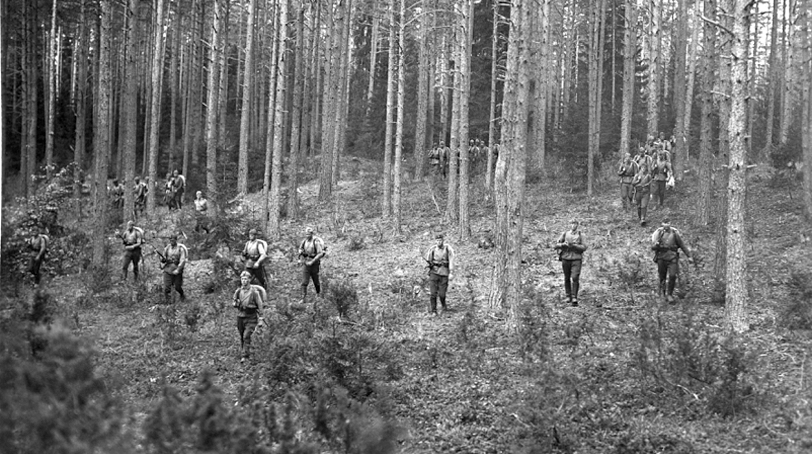 The premise for developing Finnish warfare skills was fighting against an enemy with superior power. The aim was to even out the imbalance of power with superior warfare skills and strategy. Offensive operations were assessed to be necessary in order to achieve this goal. Among other things, it required mobility. Doubts over the superiority of offence as a tactic arose in the 1930s. The Finnish General Staff in particular assessed that defence would become a more important tactic on the Karelian Isthmus than offence.

Tactical approaches of the air force and navy

In 1924, the British recommended an offensive approach to the Finnish Air Force. Finland followed this recommendation and procured bombers. Defence, more specifically anti-aircraft defence, became the preferred tactical approach in the 1930s.

In 1927, the Finnish Parliament passed the Navy Act, which specified the basic procurements for the navy. The procurements made according to the Act provided Finland with a naval fleet that resembled the naval force of a maritime power in miniature size. Most of the funding was used on two coastal defence ships. The Finnish Navy procured four each of submarines and motor torpedo boats.

The founding of the General Staff College in 1924 enabled the development of Finnish warfare skills. The school contributed to the theoretical study of warfare in Finnish conditions. Many of the college’s graduating officers were assigned to demanding development duties immediately upon

their graduation. The General Staff College focused on warfare in Finnish terrain.

Finland developed its tactics for forest and winter warfare 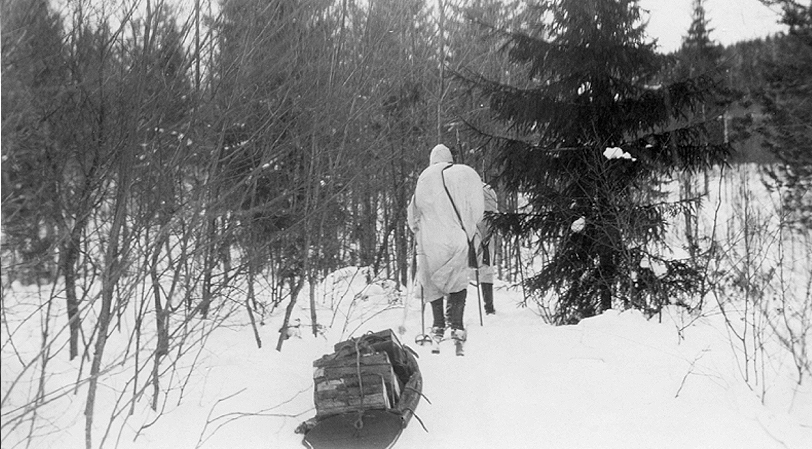 Supplies being pulled in a sledge in forested terrain. Image: Military Museum.

The impact of seasons and the terrain was taken into account in the development of the ground forces’ tactics. The basic principles for winter tactics were created through trial operations conducted by the Civil Guard organisation, Border Guard districts and the Defence Forces in the 1920s. The army studied forest warfare in the 1930s. In addition to studying a forest’s impact on weapons, the army also conducted experimental studies on its impact on tactics over the course of several years. By the start of the Winter War, the entire cadre of army personnel had familiarised themselves with the effect of a forest on troop tactics through various trials.

The key results of the winter warfare experiments in the 1920s were documented in two books published in 1929: Talvisotakirja (Handbook of Winter Warfare) and Talvitaktiikka (Winter Tactics). The handbook addresses operating methods. Similarly to Swedish books, both of these books were classified. The results and conclusions of the forest warfare experiment of the 1930s were not recorded in standing orders and guidelines in time for the Winter War. A book titled Metsätaistelukokemuksia (Forest Warfare Experiences) by Major T. V. Viljanen was published in 1938. It was a study on forest battles during the First World War. 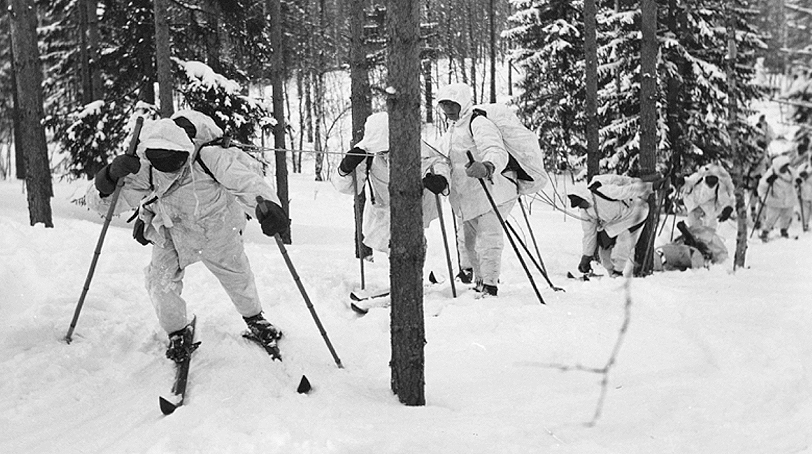 Infantry troops on skis, advancing through a forest with a sledge in tow during winter warfare training for the Civil Guards.Image: Military Museum.

Familiarisation with military operations in a forested terrain in all seasons created the conditions for the Finnish tactics used during the Winter War. Taking the Finnish conditions into account led to

the development of equipment that was suitable for forest warfare. Operating in roadless terrain in the winter was made easier by heatable tents, field kitchens pulled by horses, skis and sledges. Winter uniforms improved safety in the winter. Marching compasses made it easier to navigate in forested terrain in summer and winter alike. Submachine guns were well-suited for forest warfare in all seasons. It would have been beneficial for each infantry unit to have more of them. 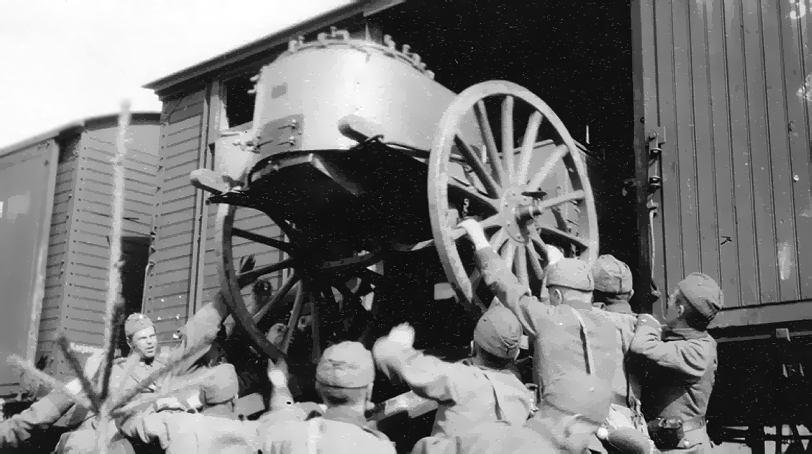 A field kitchen being loaded onto a railway wagon. Image: Military Museum.

The Winter War tactics were created during the war

The efforts during the interwar period to improve the troops’ ability to move and live in a forest created the conditions for the major victories that Finland achieved on the front lines between the Arctic Ocean and Lake Ladoga.

Where there were roads, the supply routes of the invading enemy forces were cut off with encirclement attacks carried out through roadless terrain. The trapping of enemy troops into pockets, called mottis in Finnish, became a hallmark of Finnish tactics during the Winter War. Overshadowed by the establishment of mottis was the prolonging of some of the motti battles until the end of the war. This occurred in the area north of Lake Ladoga and in Kuhmo.

The Karelian Isthmus, which was the main theatre of war in Finland, had an extensive road network and vast open fields. In this type of terrain, the enemy was able to use its superior manpower and material power efficiently. It is difficult to identify any particular aspect that would have been characteristic of Finnish Winter War tactics on the Karelian Isthmus.

Consideration of forests in troop compositions 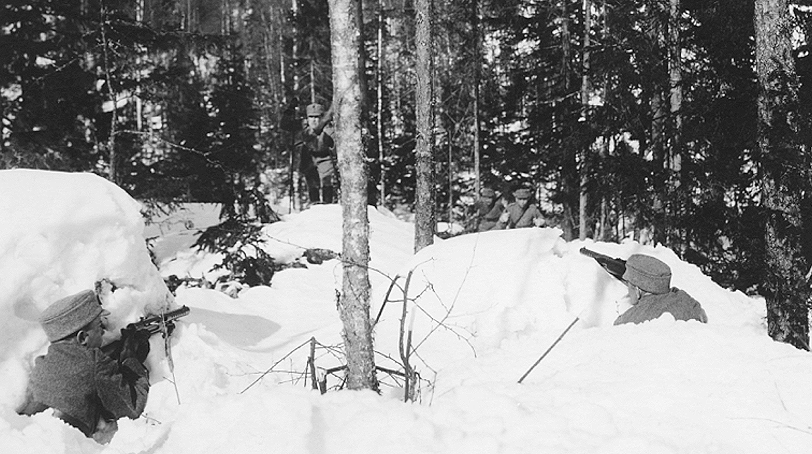 An outpost surprises an enemy reconnaissance patrol during winter warfare training for the Civil Guards. The outpost is armed with submachine guns. Image: Military Museum.

The wartime subdivision of the field army, i.e. the compositions of the divisions, regiments, battalions, companies and platoons, followed European models. However, the weaponry carried by the Finnish troops was weaker than its models in terms of both quantity and quality. One Finnish

peculiarity was the inclusion of a submachine gun as one of the weapons of an infantry group. This was based on the notion of short battling distances in forested terrain. 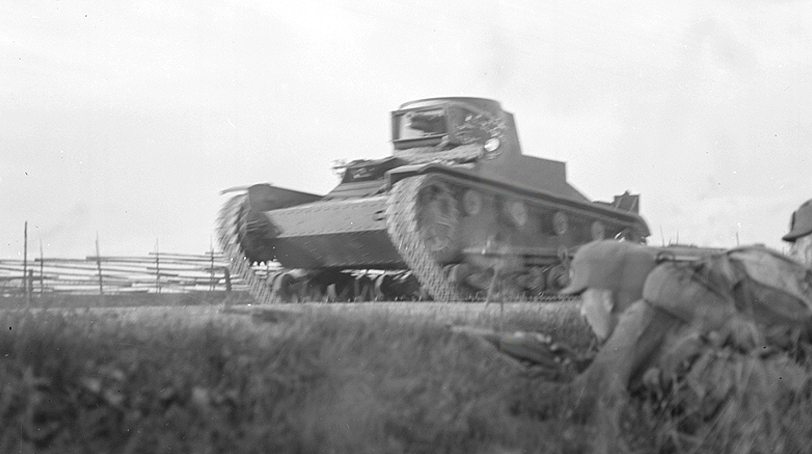 A Vickers tank during a military exercise on the Karelian Isthmus in August 1939. SA-kuva.

The Finnish military had practically no armour branch. Tanks were deemed to be poorly suited for Finnish terrain. However, it was already pointed out in the 1920s that there were areas suited for the use of tanks on the Karelian Isthmus.

The tanks procured at the end of the 1930s were primarily planned to be used as the infantry’s auxiliary weapons. Investigations into the issue of anti-tank warfare began in 1933. By the start of the Winter War, Finland had decided upon the organisations that would be formed for the planned anti-tank weaponry, but the procurement of the weapons was still far from complete.

In the 1920s, a forested terrain was believed to protect infantry and cavalry troops from aerial attacks. However, artillery and logistics units would be susceptible to aerial attacks, particularly when marching. Finland also prepared for the threat of air-to-ground weapons in the 1930s. Towards the end of the decade, Finland began its efforts to develop its air defence capability and establish air defence troops.

The issue of chemical warfare had already been examined in the 1920s, and for the following decade Finland continued to believe that the attacker would use gas weapons.