At first, the Defence Forces’ brigade-level units, the Civil Guard organisation and the Border Guard districts each developed their winter warfare skills separately. Pooling resources together sped up the development efforts. As a result, the start of the Winter War found Finland armed with reasonable winter operation equipment: skis, sledges, winter uniforms and heatable tents. However, there was not enough equipment, particularly tents, for all wartime troops. The principles of winter operations and winter tactics were already documented in the late 1920s. Utilisation of the results of the development efforts was slightly hindered by the strict orders of secrecy. Led by Lauri Pihkala, local Civil Guard units developed the population’s skiing skills and skiing as a form of recreation.

According to the memoirs of Eirik Hornborg, Finnish military experts considered the idea of the Russian SFSR attacking in winter to be almost impossible in 1919. However, the General Staff considered an attack to be possible. The General Staff assessed Finland’s capability of repelling an attack in the winter to be low, particularly on the Karelian Isthmus. Major General Karl Wilkama (Wilkman until 1919), who was the commander of the Finnish Army at the time, had a different opinion on Finland’s chances of success. According to him, Finland’s only chance of resolving a war in its favour was in the winter. 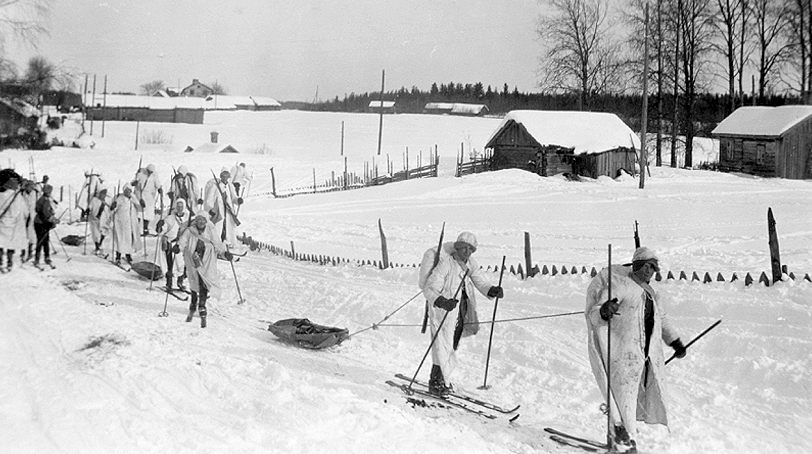 In winter 1921, the Suojeluskuntalainen magazine published a series of articles under the heading of ‘Jalkaväki suksilla’ (Infantry on Skis). The articles were written by E. Hannula. The Civil Guard Supreme Headquarters compiled the articles into a book. In the book’s preface, Hannula stated that the Defence Forces and the local Civil Guard units had neglected their troops’ winter warfare training. 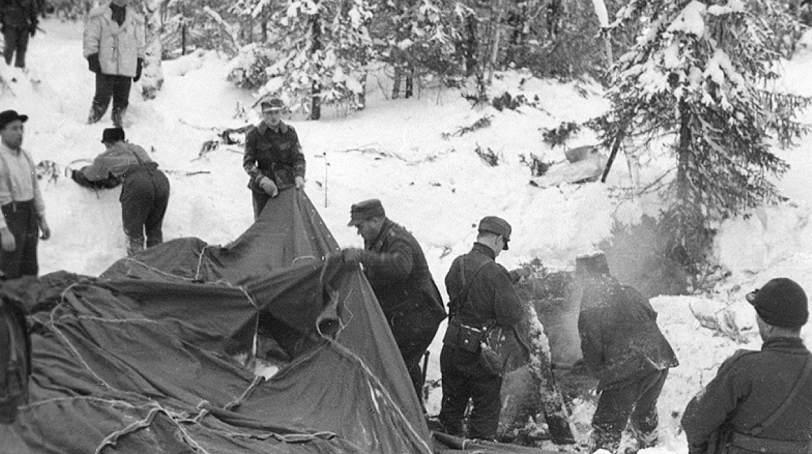 In the early 1920s, Civil Guard units carried out a great many trials related to winter warfare. The trial operations of 1923 included a 300-kilometre-long ‘military ski trip’, among other things. The Civil Guard Supreme Headquarters aimed to develop cross-country skiing and the model of military-issue skis. The Civil Guard Officer School also studied winter tactics.

The Civil Guard organisation as a promoter of skiing skills 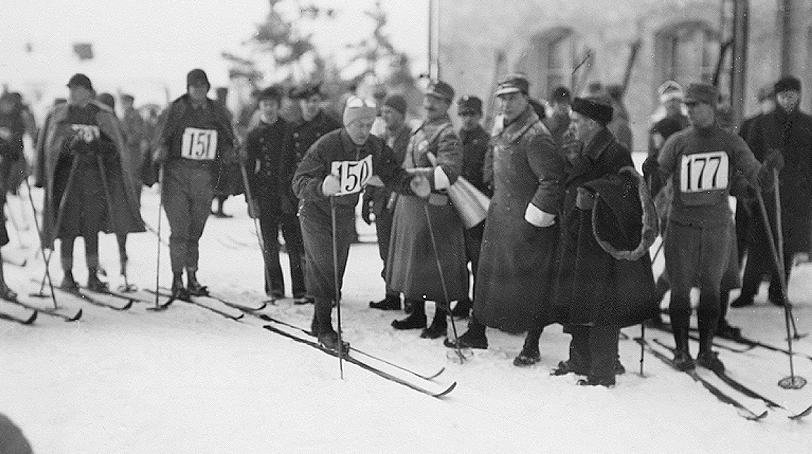 Lauri (Tahko) Pihkala headed the development of ski equipment within the Civil Guard organisation. Pihkala and the organisation played an important role in improving the population’s skiing proficiency across Finland. Primary schools also contributed to this development. By the start of the Winter War, being able to ski was a matter of course in Finland.

Tahko Pihkala also invented pesäpallo, a Finnish variant of baseball that became a national team sport. While playing the sport, the players were simultaneously improving their military skills. The advancing, or sliding, of the batting team’s players from base to base served as training for advancing in the first phase of an individual soldier’s attack. Advancing from third base to home plate trained soldiers in the last phase of an attack, i.e. charging. Throwing the ball trained the defending team in throwing hand grenades. 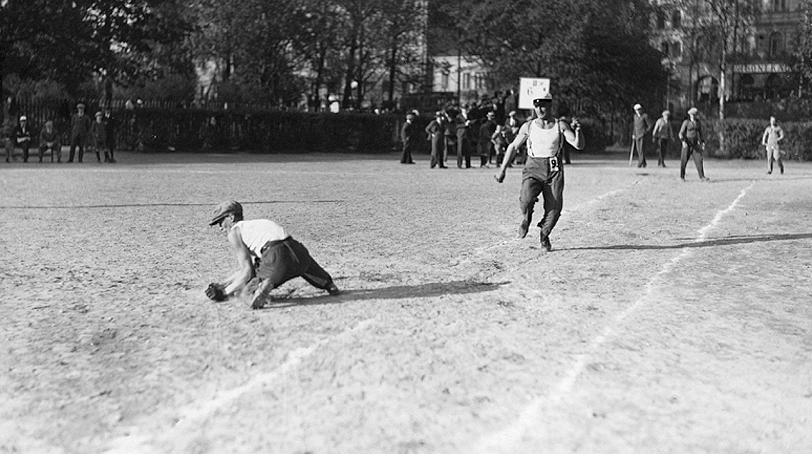 The lack of skis prevented troops from operating in a forest

The peacetime brigade-level units of the early 1920s did not have enough skis. There was not enough equipment available for all the trainees. Because of this, infantry troops were only able to operate near roads during winter exercises. 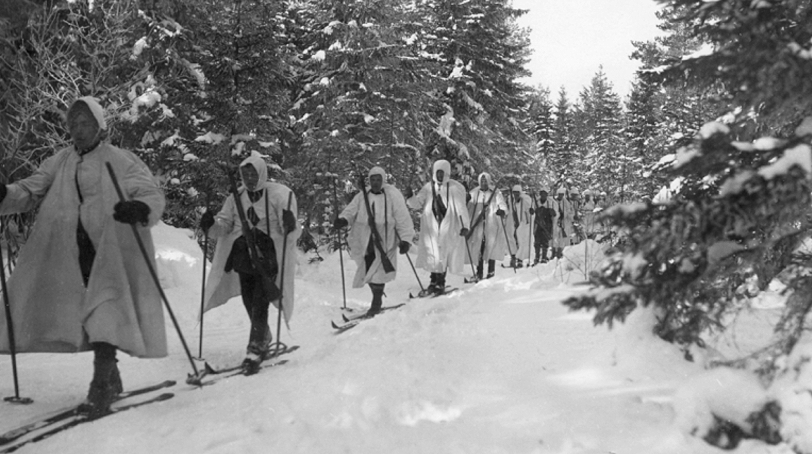 Infantry troops of the army marching on skis in the winter. Image: Military Museum.

At least one peacetime division conducted winter operation trials in 1923. The results of these trials were recorded in a 16-page account. It began as follows: ‘Our experiences of winter warfare over the course of last winter proved that winter warfare in Finnish conditions is not only possible on a larger scale, but it also seems to have the potential to become our greatest strength.’

The Civil Guard Supreme Headquarters organised a ski march from Rantasalmi to Kajaani in winter 1924. The participants of the march also included army officers. The results of the trial were discussed in a joint meeting of the Advisory Board, held in July. Reserve Captain Lauri (Tahko) Pihkala served as chairman.

The plan drafted by Pihkala’s Advisory Board

The Advisory Board prepared an extensive plan on the development of winter warfare operations.

A wide range of areas for research and development was specified for each area of winter operations. One area comprised issues related to skis, wood material for skis, poles, ski wax, sledges and sled dogs. According to the plan, the Defence Forces’ radio troops had to focus on developing a radio sledge.

The plan divided the development duties related to each area of winter operations to different operators. In the plan, the Commissariat of the Ministry of Defence was put in charge of the development and procurement of personal equipment, tents and portable stoves. The plan also included a proposal on experts to be used in the development efforts. The trials related to the health care of the ski troops were proposed to be placed under the responsibility of the Civil Guard Supreme Headquarters.

Proposal on a joint trial unit

The Advisory Board proposed for the Civil Guard organisation and the Defence Forces to establish a joint company-strength trial unit. Kajaani was proposed as the location for the trials, with accommodation for the company established at the Border Guard district’s garrisons.

In 1925, the General Staff ordered large-scale winter operation trials to be carried out in all brigade-level units. This order lacked instructions for carrying out the trial. The order included roughly fifty questions on the effects of winter on almost all military operations. Furthermore, the order assigned the 1st Bicycle Battalion as the actual trial battalion of the winter warfare operations.

In 1927, the Defence Command sent a handout version of Talvisotakäsikirja (Handbook of Winter Warfare) to the troops for trial use. The handbook addressed winter equipment and its use but not winter tactics. In their statements, the peacetime divisions stated that a standing order addressing winter tactics was required in addition to the handbook.

In 1927, Major General Aarne Sihvo, the commander of the Finnish Army, set up a committee to prepare a manuscript for a handbook on winter warfare. The committee was chaired by Major Erkki Raappana from the Joensuu Border Guard District. The other members of the committee were Major Aaro Pajari from the Civil Guard organisation, Captain K. Å. Slöör from the General Staff and Captain K. A. Breitholtz from the 1st Bicycle Battalion. Sihvo confirmed the adoption of the handbook prepared by the committee in January 1929.

In February 1929, the commander of the Finnish Army confirmed the adoption of a book on winter tactics, titled Talvitaktiikka. It was not an actual standing order. The book primarily provided instructions for taking winter into account in tactics. The book was written by Major K. A. Tapola, a teacher of tactics at the General Staff College.

The books Talvitaktiikka and Talvisotakäsikirja were to be treated like secret documents that could only be used by headquarters. For example, the books were not allowed to be taken along to military exercises. The Army Command proposed to the Civil Guard Supreme Headquarters, to no avail, for the book Jalkaväki suksilla (Infantry on Skis) to also be classified as secret.

The markings classifying the books as secret were removed from both books in June 1939. They were replaced with the following words: ‘The contents of the standing order may not be addressed or referred to in any writings intended to be made available to the public, and the book may not be handed over or loaned to any third parties.’