According to the worst threat scenario, the Soviet Union could mount a surprise attack on southern Finland via the Karelian Isthmus. The major city of Leningrad provided good conditions for establishing and concentrating assault troops near the Finnish border in secret. This threat scenario was behind the decision to release the peacetime army, i.e. ground forces, from the obligation of establishing a field army, i.e. wartime ground forces.

Lieutenant General Hugo Österman, a jaeger officer and the commander of the Finnish Army, led the Finnish Defence Forces in peacetime. The main parts of the Army Command were incorporated into the Ministry of Defence in 1938. The army headed the army corps, the regional mobilisation system, the air force and the navy as well as various military schools and institutions. War planning was carried out by parts of the General Staff that were left outside of the Ministry of Defence in the reorganisation. They were left under the supervision of Field Marshal Mannerheim, who was also the chairman of Finland’s Defence Council. Lieutenant General Lennart Oesch served as chief of the General Staff.

The peacetime army was called the army corps, which headed three divisions and the Cavalry Brigade, among other units. Lieutenant General Harald Öhquist, a jaeger officer, was the commander of the army corps. His command headquarters, the Army Corps Headquarters, were located in Vyborg Castle in Viipuri (Vyborg).

The divisions were different from wartime divisions. Supplemented with reservists and Civil Guards, the army corps forces were intended to serve as covering forces in the initial phase of a war. Their mission was to secure the establishment and concentration of the field army, i.e. troops formed mainly of reservists.

The regional mobilisation system established most of the wartime ground forces

The Finnish wartime army comprised the troops who served during peacetime in the 1930s, i.e. the peacetime army, as well as a field army that was established during mobilisation. In addition to the General Headquarters, the field army included three army corps headquarters, nine divisions, four brigades and separate battalions. 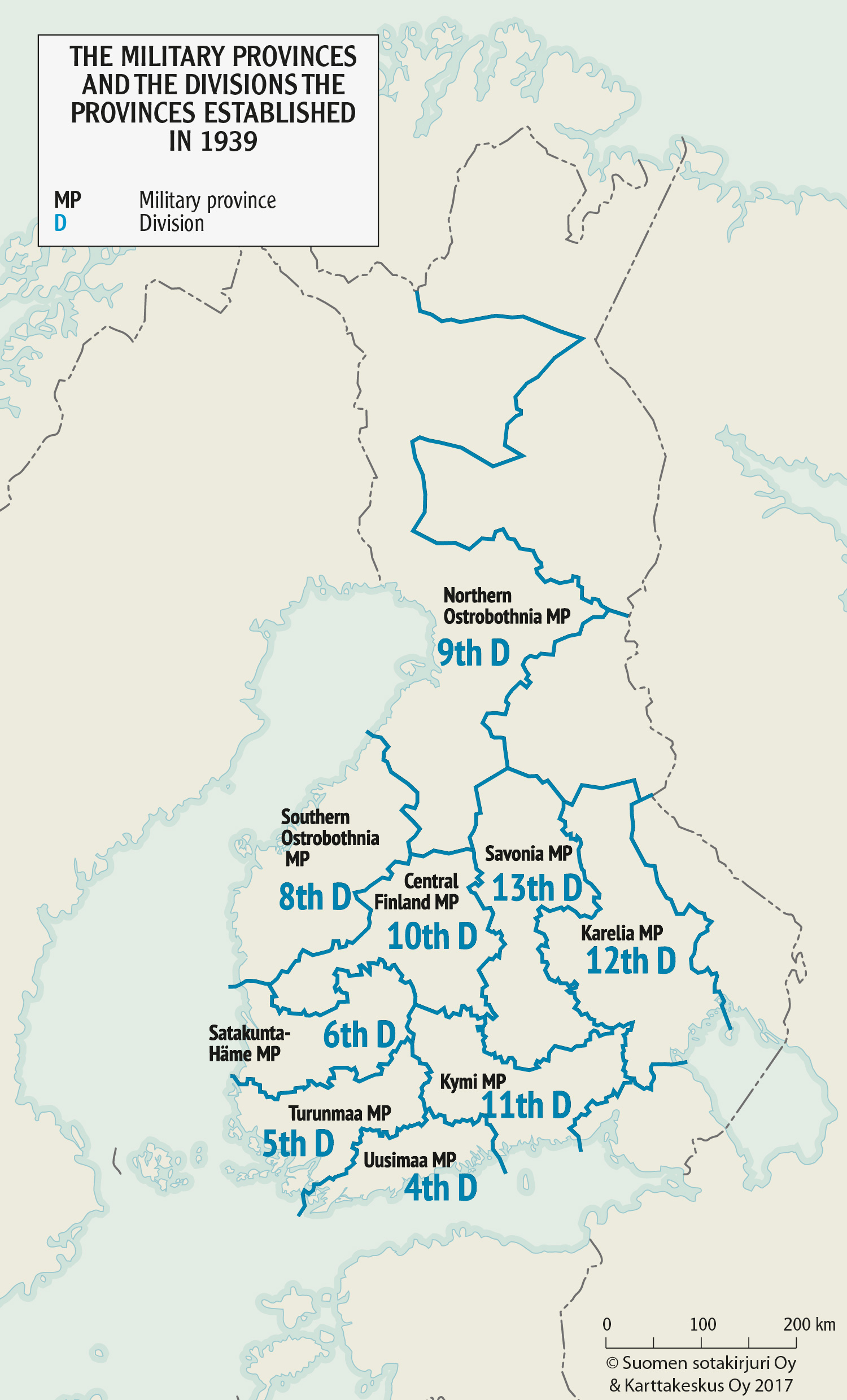 A military province was tasked with establishing the three infantry regiments, one artillery regiment, othercombat and combat support units and logistics troops in its division. A division’s combat support units included field artillery troops and technical troops. The latter included the signal troops and engineer troops. Military provinces could also be tasked with establishing troops for higher command echelons, i.e. the army corps and General Headquarters, as well as naval and air force troops.

The military districts near the border only established covering forces 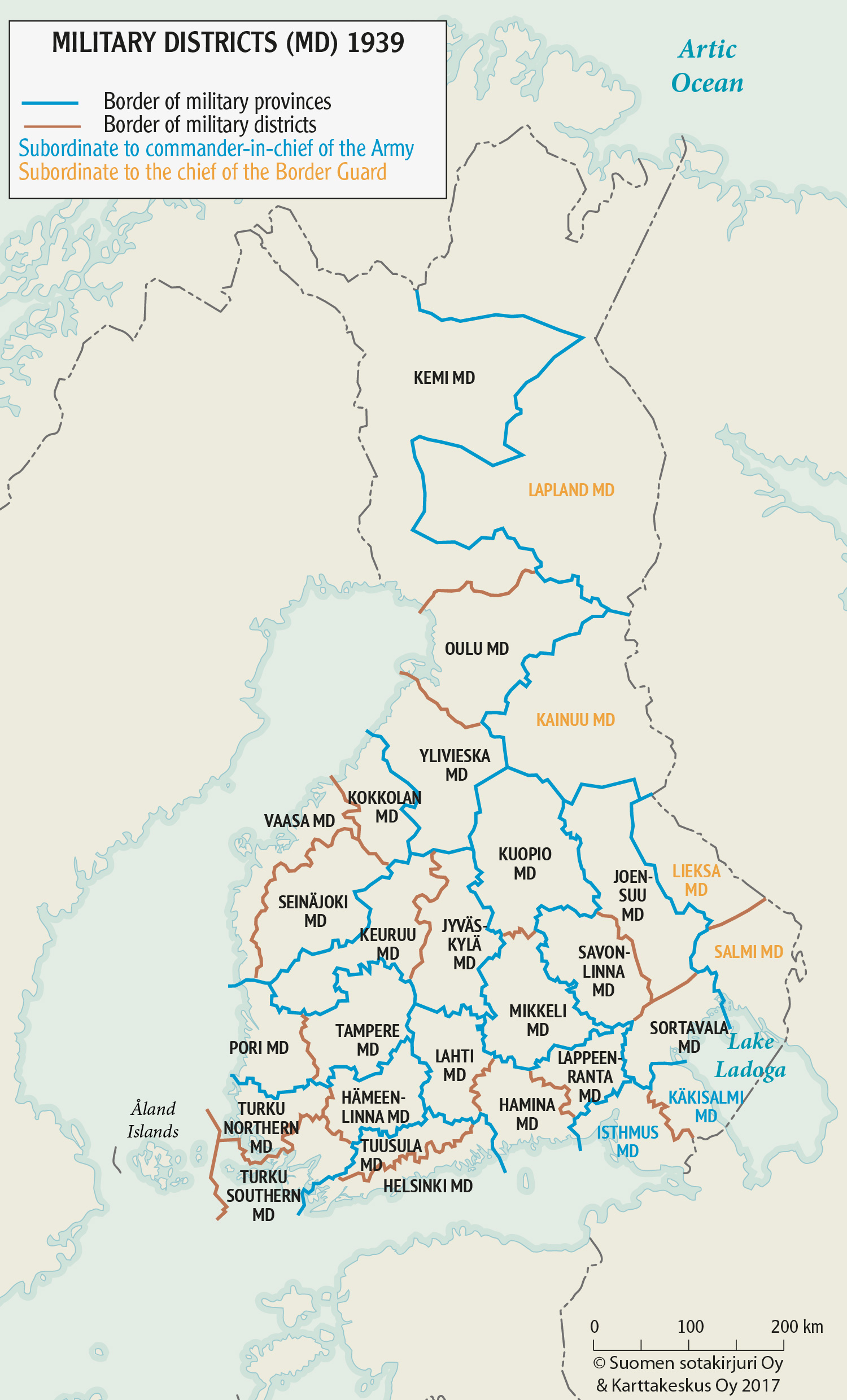 Prior to the Winter War, Finland was divided into 29 military districts. The Åland Islands were left out of this breakdown. Their population was exempt from conscription. Of the military districts, 23 were subordinate to military provinces and thus belonged to their regional organisations. The mission of the six military districts located on the eastern border was to supplement the covering forces formed by peacetime troops.

The wartime role of the chief of the Border Guard was to be in charge of defending the eastern border between the northern part of the Salmi Military District and the Arctic Ocean.

The headquarters, general staff units and logistics units were established in cities 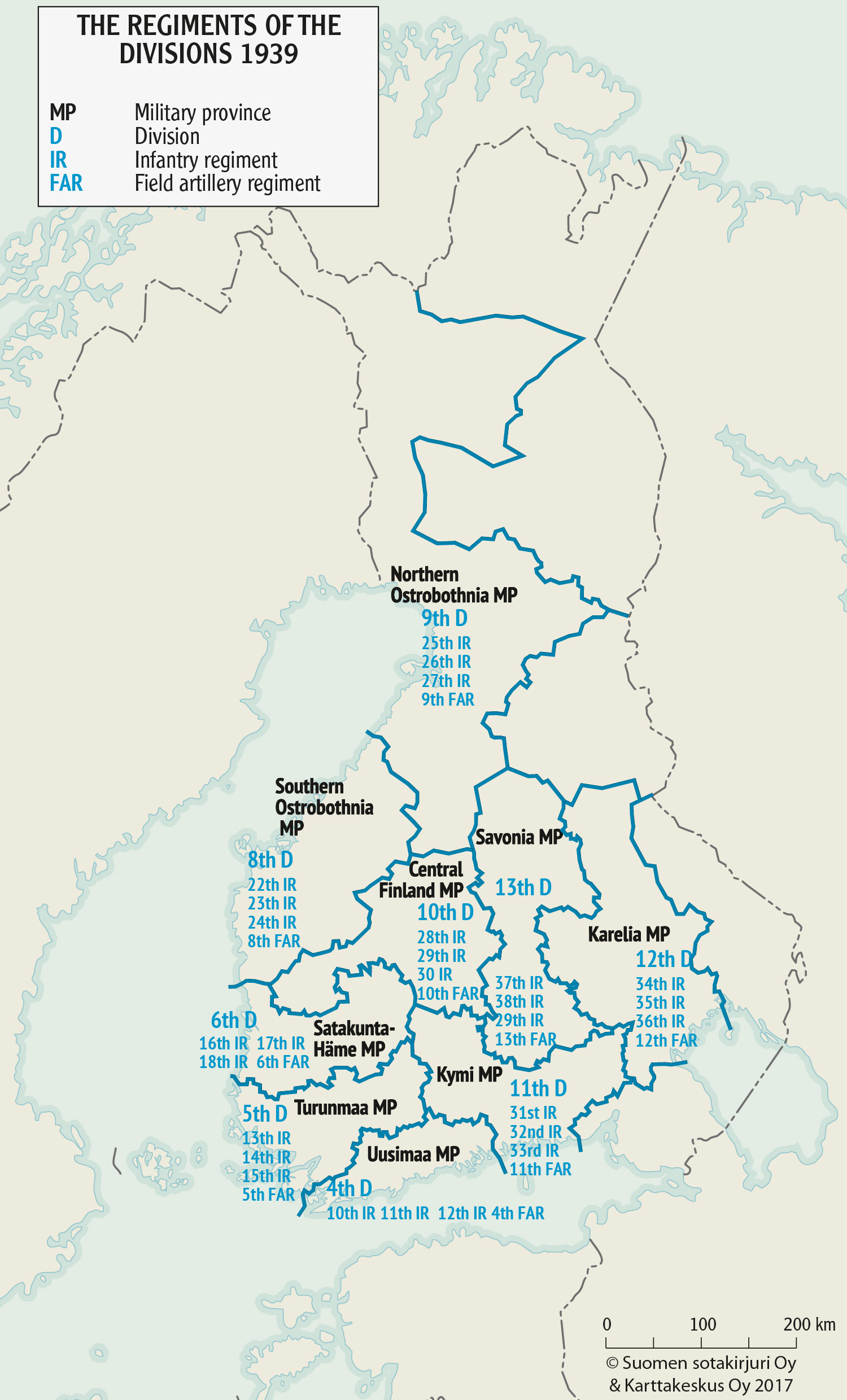 The divisional organisations already had to be changed during the additional refresher training.

At the very start of the war, one infantry regiment (16th IR) from the 6th Division was deployed in the Tolvajärvi (Tolvoyarvi) area, reinforced with one of the division’s artillery battalions. The troops remained in this area throughout the war. In December, the division received the 22nd Infantry Regiment, which had been planned to be deployed to the Åland Islands, from the navy as a replacement for the infantry regiment that had been sent to Tolvajärvi. The 8th Division was left with only two infantry regiments, one of which (23rd IR) it was forced to hand over to the 10th Division in the Taipale (Solovyovo) area during the war.

The numbering of three divisions and their regiments was changed during the Winter War. These were (the numbers in parentheses are those adopted on 1 January 1940):

The peacetime army as covering forces on the Karelian Isthmus 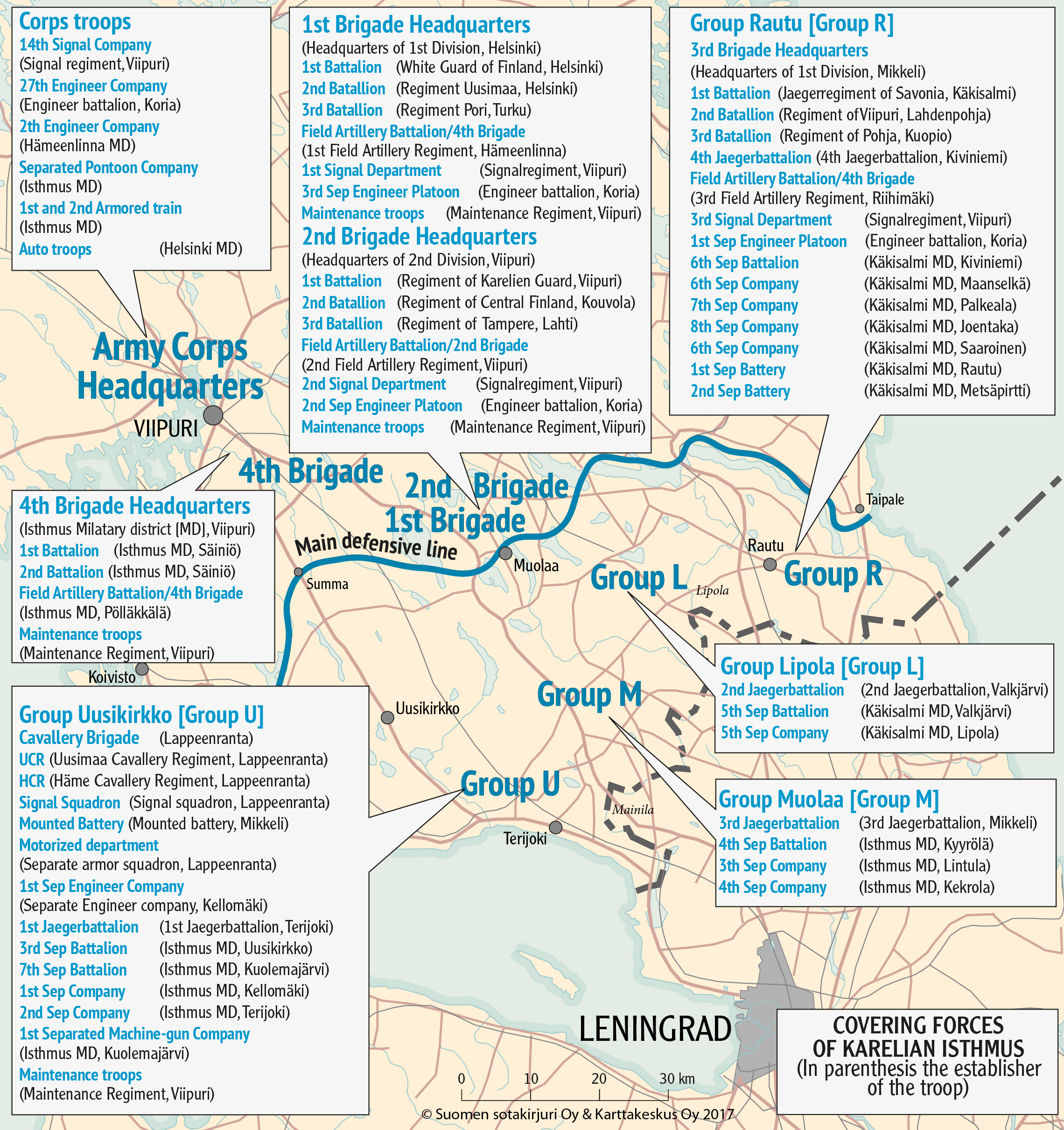 As the threat of a surprise attack was considered to be greatest on the Karelian Isthmus, the plan was to deploy the troops of the peacetime army corps there practically in their entirety.

The peacetime brigade-level units had to form four brigades and the Cavalry Brigade, among other units, out of recruited personnel, conscripts in active service as well as reservists and Civil Guards who were called to service. The headquarters of each peacetime division had to be turned into army corps headquarters. Two of them operated on the Karelian Isthmus and one in Ladoga Karelia, north of Lake Ladoga. 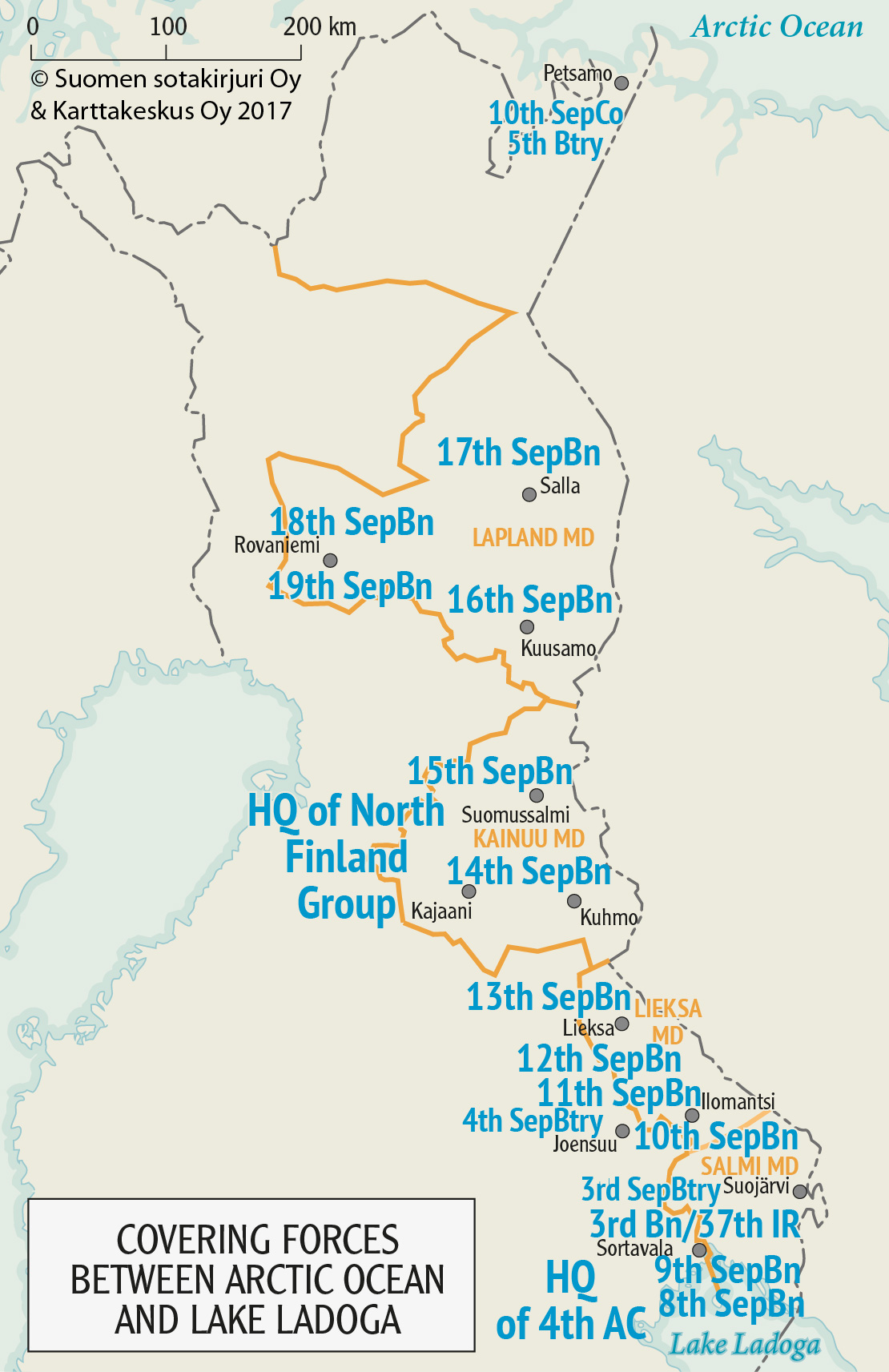 The Salmi Military District (SALMI MD) and Joensuu Military District established the covering forces for the area between Lake Ladoga and Ilomantsi. These corps included three separate battalions (8th SepBn, 9th SepBn and 10th SepBn) and one battalion from the 37th Infantry Regiment (III/37th IR). The only covering forces unit in the area that was established by the peacetime army was the 4th Corps Headquarters. It was established by the peacetime 3rd Division Headquarters that operated in Mikkeli.

The Border Guard Headquarters established the North Finland Group Headquarters, which belonged to the covering forces. In the group’s territory, which spanned from Ilomantsi to Petsamo,

In municipalities near the border, troops were established at training centres. So many additional personnel had often been called to service at these centres that it was also possible to form an additional unit, usually a separate company.

The majority of the field armys nine divisions, i.e. five divisions, was planned to be concentrated on the Karelian Isthmus, with another two divisions concentrated in the area north of Lake Ladoga, between Ladoga and Suojärvi (Suoyarvi). Separate battalions formed of the Border Guard’s own peacetime troops and reservists were reserved for defending the area between Ilomantsi and the Arctic Ocean. Including all Border Guard battalions, the reservists were roughly equal in number to a division’s infantry. The plan was for these troops to defend a front of over 1,200 kilometres in length without artillery.

Of the field army’s nine divisions, two were planned to be used as the commander-in-chief’s reserves. One was planned to be concentrated in the Taavetti area, at the rear of the Karelian Isthmus, while leaving the other at its place of establishment in the Kemi–Oulu region. The latter division lacked artillery, among other things.