Air defence forces during the war

In addition to the ground-based air defence troops under the Air Defence Headquarters, the navy had its own anti-aircraft defence on ships and at coastal artillery forts. The small number of anti-aircraft weapons was successfully increased in autumn 1939 and during the war. In the first stage of the war, the deployment of air defence troops focused at the rear of the frontline troops and on the home front. The ground-based air defence of the frontline troops was improved during the war. The reported number of enemy aircraft brought down by the air defence was higher than the number shot down by the air corps.

Air defence was established as a military branch not long before the Winter War. At the start of the war, the air defence forces primarily comprised fixed and mobile anti-aircraft batteries and anti-aircraft machine gun detachments. Almost all air defence units were committed to the protection of railway routes as well as industrial and population centres. The frontline forces had practically no protection against aerial attacks.

The anti-aircraft guns and machine guns that arrived in Finland after the additional refresher training, i.e. mobilisation, and prior to the start of the war enabled the improvement of the air defence of the frontline troops during the war. Units formed of the anti-aircraft machine guns were deployed to protect the frontline troops who were engaged in battle, while units formed of the light anti-aircraft guns were deployed to protect the troops deployed directly behind the front lines, i.e. the reserves.

Because of the lack of weaponry, some of the air defence forces included in the list of units to be established in time of war were not initially established. Their personnel had to be decommissioned. The situation improved prior to the start of the Winter War. In autumn, the number of anti-aircraft guns at the air defence forces’ disposal more than doubled, increasing from

The number of anti-aircraft weapons doubled again during the war

Anti-aircraft detachments were subordinated to the divisions in February 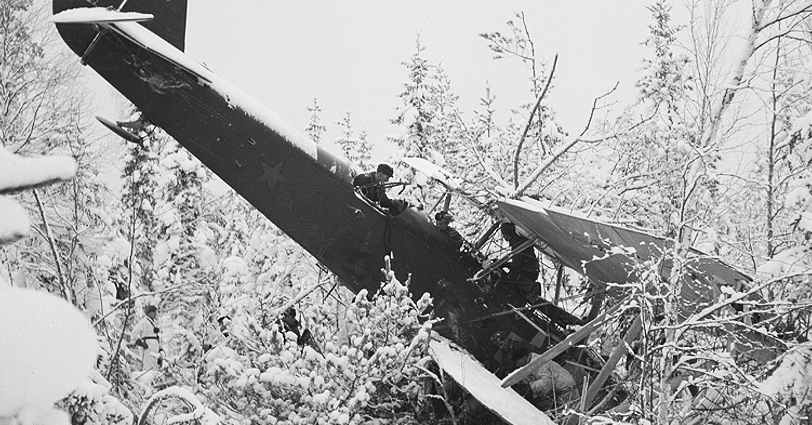 A Soviet R 5 aircraft brought down by an anti-aircraft machine gun of the Suistamo (Suystamo) airfield on 7 January 1940. SA-kuva.

The Soviet Union’s aerial operations focused on the Karelian Isthmus

According to the research of Ahti Lappi, the Soviet Union conducted more than 84,000 flights during the Winter War. At the front lines, the Soviet Air Force supported the offensives of the ground forces and launched attacks against troop transport and rail transport at the rear.

The aerial operations focused on the Karelian Isthmus. Approximately 60% of all flights, i.e. approximately 53,000, were conducted there. A total of 27,000 of them were bombing flights. When supporting the attack, the aerial operations extended to a depth of 6–8 km from the front line. The Soviet Air Force supported the large-scale offensive that was launched on 11 February with approximately 1,000 flights per day.

The main targets on the home front were railway junction stations, railway bridges, airfields and ports. Cities were bombed with the aim of weakening the civilian population’s morale. Soviet aircraft conducted over 2,700 bombing runs and bombed 69 localities.