Coastal artillery in the Winter War

Of the coastal artillery’s forces, the Viipuri Sector and the Ladoga Naval Defence participated in supporting battles fought on ground fronts. The Turku Sector, Hanko Sector and Koivisto Sector repelled any attempts by the enemy fleet to approach in early December. In addition to Vyborg Bay, the attack across the sea also targeted the Kotka Sector in the last stage of the war. It was repelled with shelling by the coastal artillery.

According to the operative plans, the outer islands did not belong to the areas that the Finnish forces intended to hold during the war. The first attacks on the outer islands by the Twice Red Banner Baltic Fleet started with air raids, after which the ships opened fire on the islands. The personnel of the Lavansaari (Moshchny) Coast Guard Station left the island on a motorboat during the first air raid. A destroyer of the Twice Red Banner Baltic Fleet caught up with the motorboat and sank it. The entire personnel of the station, comprising four coastguardsmen, lost their lives.

Soviet troops seized the Viipuri (Vyborg) Sector’s outer islands of Lavansaari and Seiskari (Seskar) on the first day. The Finnish coastguardsmen relocated from the islands of Suur-Tytärsaari (Bolshoi Tyuters) and Ruuskeri (Rodsher) to Suursaari (Gogland) during the following night. The enemy’s landing on Suursaari started on 1 December, and the Finnish Coast Guard detachment of approximately 30 personnel relocated from there to Haapasaari on 2 December.

The Russarö Fort turned the cruiser Kirov away on 1 December

The Hanko Sector stopped the cruiser Kirov and two destroyers from approaching by shelling them from the Russarö Fort on 1 December. The fort opened fire on the ships with its artillery battalion of six coastal guns while the ships were approximately 24 kilometres away. Some of the shells launched by the battery hit the destroyers. The Kirov turned its right side towards the fort and opened fire. The cruiser’s fire hit the island without causing damage. The ships of the Twice Red Banner Baltic Fleet withdrew from the battle and left the way they came.

At 11am on 14 December, the Utö Fort observed two G-class destroyers approaching the fort from the sea. The ships were allowed to reach a distance of approximately 11.5 kilometres from the fort before the fort opened fire with a six-inch Canet battery. The ships returned fire. According to observations made at the fort, the Canet battery managed to hit one of the vessels once. The destroyers started to generate smoke and withdrew from the battle under cover of the smoke screen. After the smoke cleared, the fort only sighted one retreating ship. The personnel at the fort deduced that the other ship had sunk.

No ship of the Twice Red Banner Baltic Fleet came within range of the coastal guns in the Hanko, Helsinki and Pellinki Sectors during the Winter War. An infantry battalion was assembled from the personnel of the Helsinki Sector in winter 1940. The sector’s chief of staff, Major J. Kiveliö, was appointed the battalion’s commander. The battalion was named Battalion Kiveliö after its commander and relocated to Vyborg Bay starting 20 February. There, it participated in the difficult final battles on the Karelian Isthmus. 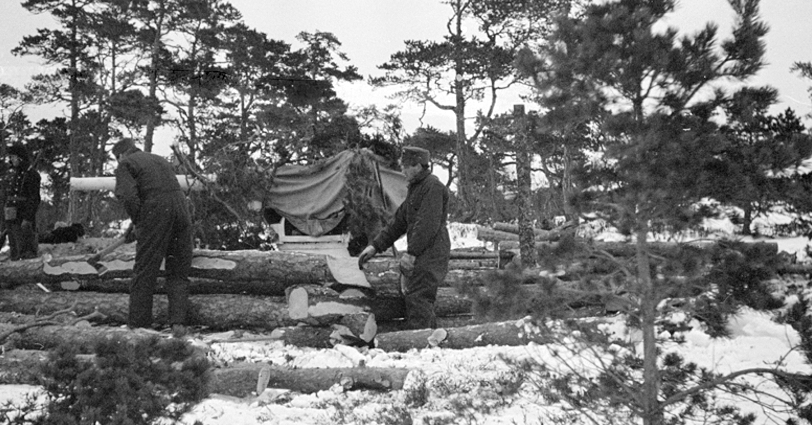 Coastal gun in position in the Åland Islands. SA-kuva.

The commander of the Southwest Finland Naval Defence, Captain S. Sundman, led the transfer of troops to the Åland Islands as ordered by the General Headquarters on 1 December. In addition to coastal troops, the transferred forces included a bicycle battalion (8th BiBn), a separate bicycle company (3rd SepBiCo) and a separate machine gun company (2nd SepMGCo). All the troops on the Åland Islands formed the Åland Defence under Sundman’s command. On 17 December, Sundman handed the role of the commander of the Åland Defence over to Jaeger Officer, Lieutenant Colonel L. Hannelius, while he himself transferred back to Turku to lead the Naval Command. The Åland Defence was left under its command. Its other subordinates were the Turku Sector and the Satakunta Sector.

Transfer of troops under the navy to Vyborg Bay 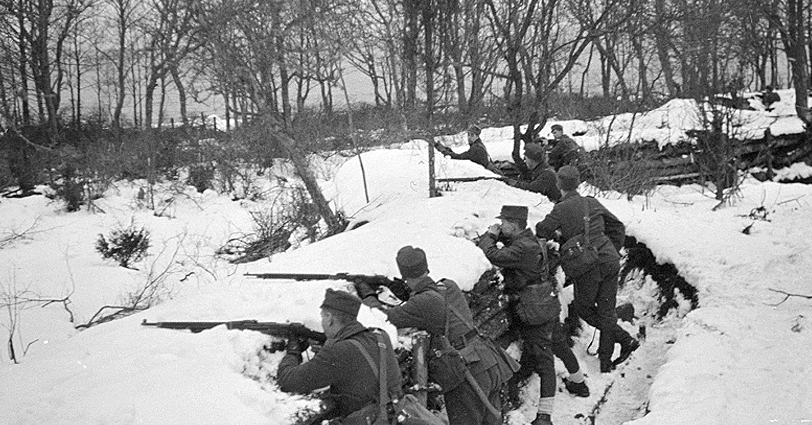 Infantry in a trench in the Åland Islands. SA-kuva.

In February, an infantry battalion was formed from the personnel of the Turku Sector and the Satakunta Sector and named after its commander, Captain V. Hällfors. The battalion was transferred to the Viipuri Sector on 24 February.

The Oulu Sector and Vaasa Sector were subordinate to the Gulf of Bothnia Naval Defence. Their primary duty was the organisation, monitoring and protection of commercial maritime transport. Neither sector had fixed coastal artillery. The heavy coastal artillery battery of Sommarö was established off the coast of Vaasa during the Winter War. Ship traffic to Vaasa ended on 22 January 1940. A battalion formed from the personnel of the Oulu Sector, commanded by Major H. Jussila, was transferred to Kymijoki from the Oulu Sector on 17 December.

The forces of the Army of the Isthmus that were deployed on the western Karelian Isthmus were ordered on 15 February 1940 to withdraw from the Mannerheim Line and retreat to the Interim Line. Fighting broke out there as soon as the Finnish forces had assumed defensive positions. The Red Army’s 7th Army, which invaded the western Karelian Isthmus, started attacking the Interim Line on 17 February.

The Koivisto Sub-sector of the Viipuri Sector, which was subordinate to the Army of the Isthmus, had a fort in the Saarenpää (Krasnoostrovskiy) area of Koivisto (Bolshoy Beryozovy) Island. The ships of the line fired on the Saarenpää Fort on 18 and 19 February. The ship of the line Oktyabrskaya Revolutsiya opened fire on the Saarenpää Fort on 18 February. After the ship stopped firing and left, the ship of the line Marat took its place and opened fire on the fort the following day. The fort took some damage from the fire by the two ships of the line, but it was still able to fire back at them and support the troops of the II Corps in their battle at the Interim Line.

While the II Corps, under the Army of the Isthmus, was fighting at the Interim Line, the Viipuri Sector was subordinated to the Army of the Isthmus. In an order issued by the army on 19 December 1939, the sector was tasked with delaying the enemy on the southern shore of Vyborg Bay and in the archipelago. Parts of the 4th Division were subordinated to the sector. The Koivisto Sub-sector of the Viipuri Sector had to hold the Koivisto Islands. The Vyborg Bay Headquarters was located in Säkkijärvi (Kondratjewo).

Over the course of the following days, enemy forces captured the southern shore of Vyborg Bay. The Finns were soon forced to withdraw from the islands near the southern shore. The Tuppura (Vikhrevoy) Fort was lost in these battles.

The situation of the forces deployed on the Koivisto Islands worsened significantly after the enemy took control of the coast of Koivisto (Primorsk). Some of the Soviets launched attacks from Koivisto to Piisaari (Severny Beryozovy) Island. On 22 February, the new commander of the Army of the Isthmus, Lieutenant General Erik Heinrichs, gave the Viipuri Sector permission to withdraw from the Koivisto Islands. The guns of the Saarenpää Fort and the Tiuri (Zapadny Beryozovy) Fort were destroyed before the retreat. The coastal troops and the ordnance they were able to carry with them relocated to Säkkijärvi on 22 and 23 February 1940, skiing across the ice in the mouth of Vyborg Bay. The venturesome ski journey in the darkness of the night succeeded. The withdrawal from the islands was protected by a battalion formed from the personnel of the Humaljoki (Yermilovo) and Saarenpää Forts. The battalion was named after its commander, Captain S. Häyrinen. It later participated in the battles in Vyborg Bay.

The forces of the Army of the Isthmus that were deployed on the western Karelian Isthmus, i.e. the II Corps, started their retreat to the Rear Line on the late evening of 27 February. To the surprise of the Finnish military command, the enemy launched an offensive across Vyborg Bay with two rifle corps in the first days of March. A coastal group was formed of the coastal artillery and infantry forces who defended the northern shore, and it was reinforced with troops from both the ground forces and the navy.

Almost at the same time, the Soviets launched an attack across the frozen Gulf of Finland in the Kotka Sector’s area. The sector’s outposts noticed the ranks of enemy soldiers marching towards the islands of Haapasaari, Huovari and Isokalastaja (Arkhipelag Bolshoy Fiskar) on 4 March.

The enemy units began their retreat at 2pm. The following day, the fighting was limited to the use of artillery fire. On 6 March, Soviet infantry forces launched a new attack in all three directions but were repelled. More scattered attacks were launched over the following few days. The Kotka Sector had, especially with coastal artillery fire, repelled the enemy infantry forces’ attempts to advance deep into the rear of the Finnish forces that were fighting at the Rear Line on the Karelian Isthmus. The Finns estimated the attacking forces to have been approximately a division in strength.

The Kotka Sector was subordinated to the Hamina Group