An offensive launched by several Soviet divisions in the area between Lieksa and Petsamo, which fell under the responsibility of the North Finland Group, took the General Headquarters by surprise. It concentrated more troops in the area and took command of the Lapland Group. Important victories were achieved in the reduced area of responsibility of the North Finland Group: first in Suomussalmi at the end of December and then on the Raate road in early January. An attack by an enemy division was stopped in the Kuhmo area, but the Finns were unable to destroy the attacking forces. Motti battles continued in Kuhmo until the end of the war.

The Soviet Union launched an offensive in the North Finland Group’s area with four divisions on the morning of 30 November. In the first phase, one mountain division (104th MountD) of the 14th Army (14th A) attacked in the Petsamo area.

The 9th Army (9th A) advanced towards Oulu in the area between Kandalaksha (Kantalahti) and Medvezhyegorsk. It was commanded by Corps Commander Mikhail P. Dukhanov. He was released from the command of the army on 22 December due to the army’s weak performance. Corps Commander Vasily I. Chuikov replaced him as the army’s new commander.

One rifle division (122nd RD) from the army attacked in the Salla area, while another (163rd RD) attacked in the Suomussalmi area and one mountain division (54th MountD) in the Kuhmo area. The first two divisions belonged to the 47th Rifle Corps (47th RC), which was focused on the Kemijärvi–Salla area. More troops were being concentrated there.

On 8 December, Dukhanov relocated the 47th Rifle Corps Headquarters from the Salla area to the Suomussalmi area. The army’s main focus also shifted there. The 44th Rifle Division, which was to be concentrated at the front, was deployed in the Suomussalmi area instead of Salla. The rifle division, which had participated in the invasion of Poland, was transported to Kem by railway, with the first of the troops arriving there on 14 December.

The fact that the enemy attacked in the northern areas with several divisions despite the sparse road network came as a surprise to the Finnish military command. Because of this, the military command was forced to multiply the number of troops deployed to defend Northern Finland during the first weeks of the war.

Over the course of December, the enemy’s offensive was stopped in all areas, and the first major victory in the North Finland Group’s area was achieved in the Suomussalmi area.

At the outset of the war, defending the almost 800-kilometre-long front extending from the Arctic Ocean to the area south of Lieksa was the responsibility of the North Finland Group, which was headquartered in Kajaani and commanded by Jaeger Officer, Major General Wiljo Tuompo. The group was initially neighboured by the IV Corps (IV C) and, as of 7 December, Detachment Talvela (Det Talvela), which was renamed Group T on 19 December. 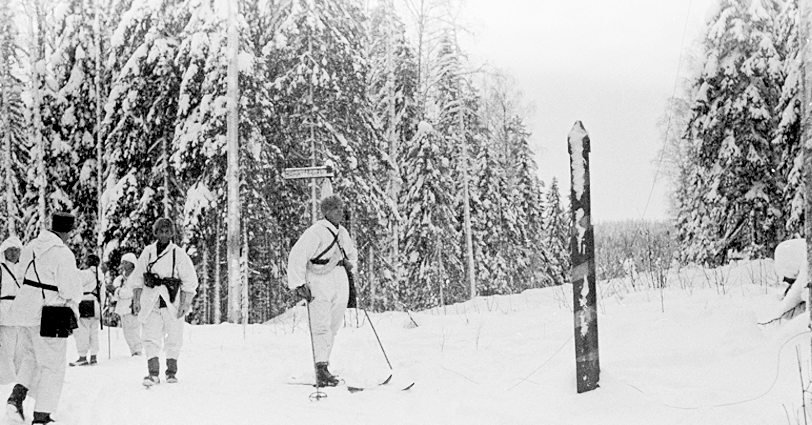 The North Finland Group took command of the troops in the direction of Kuhmo on 2 December. The North Karelia Group, commanded by Jaeger Officer, Lieutenant Colonel Erkki Raappana, was responsible for the Lieksa and Nurmes areas. The units under Raappana’s command stopped the enemy’s attacks in the reduced area of responsibility of the North Karelia Group in the first days of December. The enemy troops who had attacked in two areas withdrew back behind the national border at Christmas.

Major victories were achieved in Suomussalmi and on the Raate road 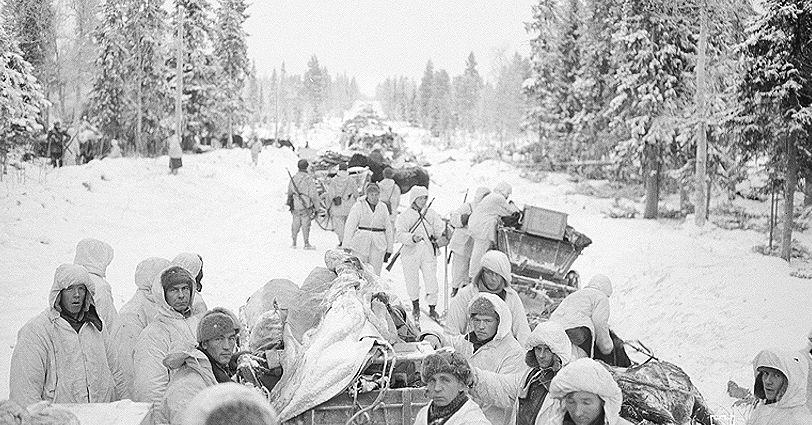 The 15th Separate Battalion, which had been formed in Suomussalmi, and a battalion of the Field Reinforcement Brigade (IV/FRBde) that had been concentrated in the area soon after the outset of the war were unable to stop the enemy from reaching the village of Suomussalmi during the first week of the war.

The separate battalion (16th SepBn) that had been in charge of defending Kuusamo was relocated to Piispajärvi further down south to stop the troops who had advanced north from Suomussalmi. More troops were concentrated in the area.

A new 9th Division was formed from the troops deployed in the direction of Suomussalmi, and Jaeger Officer, Colonel Hjalmar Siilasvuo was appointed as its commander. Over the course of December, the troops under Siilasvuo’s command and the troops of Group Susi, which operated in the Kuusamo area under the command of Lieutenant Colonel Paavo Susitaival, defeated the enemy’s 163rd Rifle Division (163rd RD), which had occupied the village of Suomussalmi. The 9th Division, commanded by Siilasvuo, subsequently defeated the 44th Rifle Division, which had been stopped on the Raate road during the Battle of Suomussalmi.

A brigade was concentrated in the Kuhmo area, which had been transferred under the command of the North Finland Group

On 6 December, a reinforced infantry regiment was concentrated in the Kuhmo area and named Brigade Vuokko after its commander, Jaeger Officer, Lieutenant Colonel Aksel Vuokko. An attack launched towards Kuhmo by the enemy’s 54th Mountain Division (54th MountD) was successfully stopped before it reached the central village.

Following the victorious battles in the Suomussalmi area, the 9th Division was left at the North Finland Group’s disposal in the Kuhmo area. Towards the end of January, the division relocated to the Kuhmo area, where it was tied up in motti battles against the 54th Mountain Division and the troops seeking to come to its assistance until the end of the war.

The General Headquarters took command of the Lapland Group

On 11 December, during the Battle of Suomussalmi, the General Headquarters (GHQ) took command of the Lapland Group and appointed Jaeger Officer, Major General K. M. Wallenius from the reserve as its commander. The Kuusamo area was also incorporated into the Lapland Group’s area of responsibility. After this, the North Finland Group retained command of the troops in the areas of Suomussalmi and Kuhmo as well as the North Karelia Group.