First battles in the IV Corps area in 1939 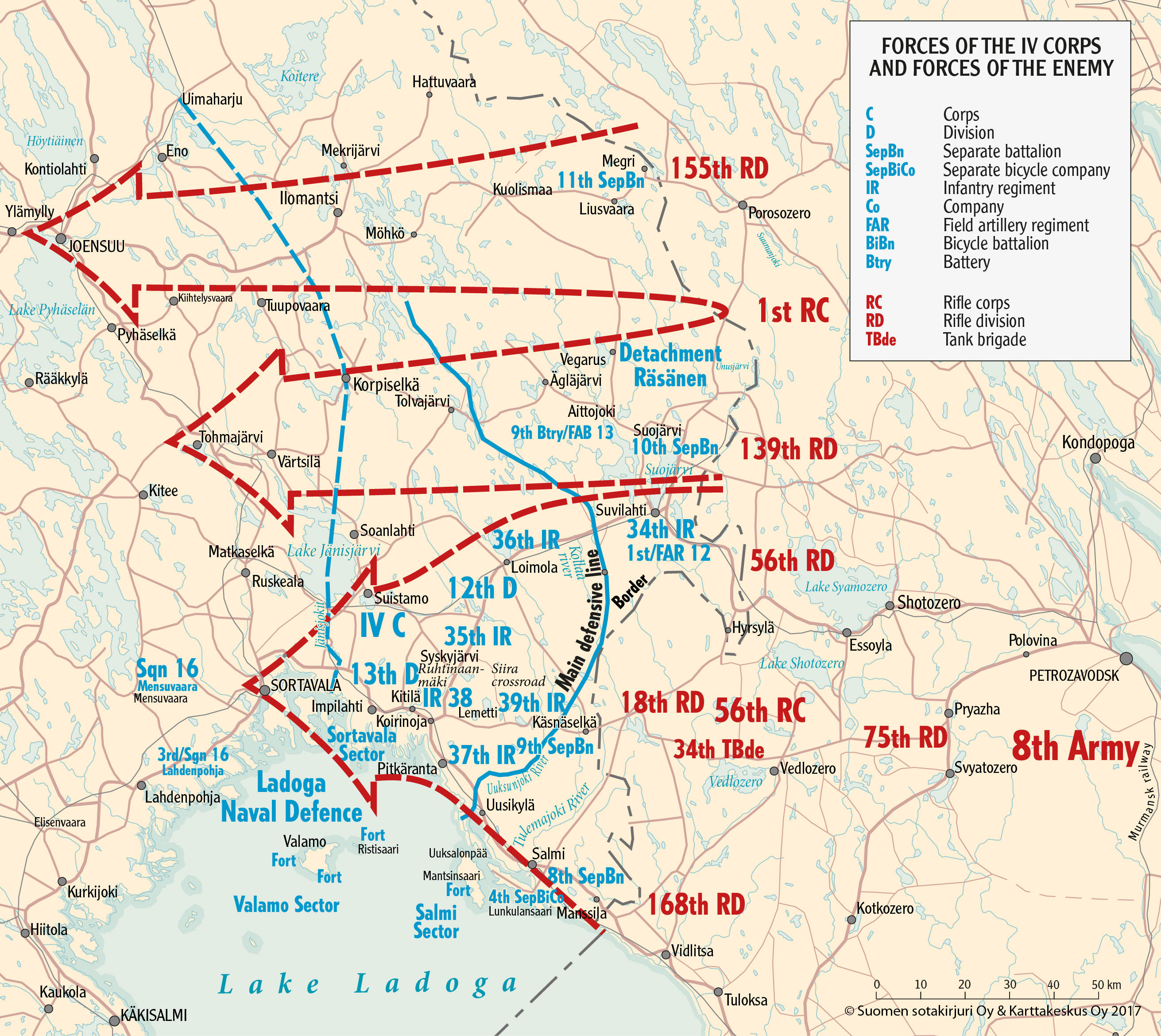 Forces of the IV Corps

Two separate battalions (11th SepBn and 10th SepBn) operated in the area between Ilomantsi and Suojärvi. The battalion deployed further down south was reinforced with one field artillery battery (9th Btry/13th FAB), among other units. These units formed Detachment Räsänen. The battalions’ areas of responsibility were detached from the area of responsibility of the IV Corps (IV C) on 5 December. Detachment Talvela, later renamed Group Talvela, was formed to be a command echelon under the General Headquarters.

One liaison squadron (Sqn 16) from the Flight Group of the Army of the Isthmus was subordinated to the IV Corps (IV C). Its first squadron (3rd/Sqn 16) was deployed in Lahdenpohja (Lakhdenpokhya).

The corps (IV C) did not have a fortified defensive position. In their agreement on the inviolability of their border, signed in 1922, Finland and the Soviet Union promised not to place larger military contingents near the border in the area between Lake Ladoga and the Arctic Ocean. The line determined as the defensive line was moved nearer to the border during the additional refresher training. At this time, the commander-in-chief, Field Marshal Gustaf Mannerheim, ordered the corps to prepare for battle, starting from the border. With the exception of the infantry regiment stationed in the Suvilahti area (34th IR), the infantry regiments (12th D: 34th IR, 35th IR, 36th IR; 13th D: 37th IR, 38th IR and 39th IR) of the IV Corps’ divisions (12th D and 13th D) were deployed at the defensive line or as a reserve behind it. One separate battalion (9th SepBn) was stationed in Käsnäselkä (Kyasnyaselkya) and another (8th SepBn) in Salmi in front of the defensive line near Lake Ladoga.

The Ladoga Naval Defence, which was subordinate to the General Headquarters, operated in Lake Ladoga, on the IV Corps’ (IV C) flank. Under the Ladoga Naval Defence was the Salmi sector, which had coastal artillery fortifications on the islands of Mantsinsaari (Fort) and Ristisaari (Fort). The Salmi sector also commanded a separate bicycle company on the island of Lunkulansaari.

The commander of the 8th Army was replaced on 4 December

The Leningrad Military District commanded the 8th Army, which was deployed on the isthmus between Lake Ladoga and Lake Onega. At the start of the war, the army was commanded by Division Commander I. N. Habarov. He was forced to step aside on 4 December. After Habarov, the army was temporarily commanded by its deputy commander, Army Commander 2nd Rank V. N. Kurdyumov. Appointed by the Main Command of the Red Army, i.e. the Stavka, the army’s new commander, Army Commander 2nd Rank G. M. Stern, arrived at the location on 13 December. The 8th Army’s mission in the first phase was to take Sortavala and advance to the Sortavala–Tohmajärvi–Joensuu line.

The army’s attack was focused near Lake Ladoga. This is where two rifle divisions (168th RD and 18th RD) and a tank brigade (34th TBde) of the 56th Rifle Corps launched an attack. One of the rifle corps’ rifle divisions (56th RD) operated in the Suojärvi area.

The rifle corps (1st RC) that attacked in the areas north of Suojärvi initially comprised two rifle divisions (139th RD and 155th RD). The army had one rifle division (75th RD) in reserve. 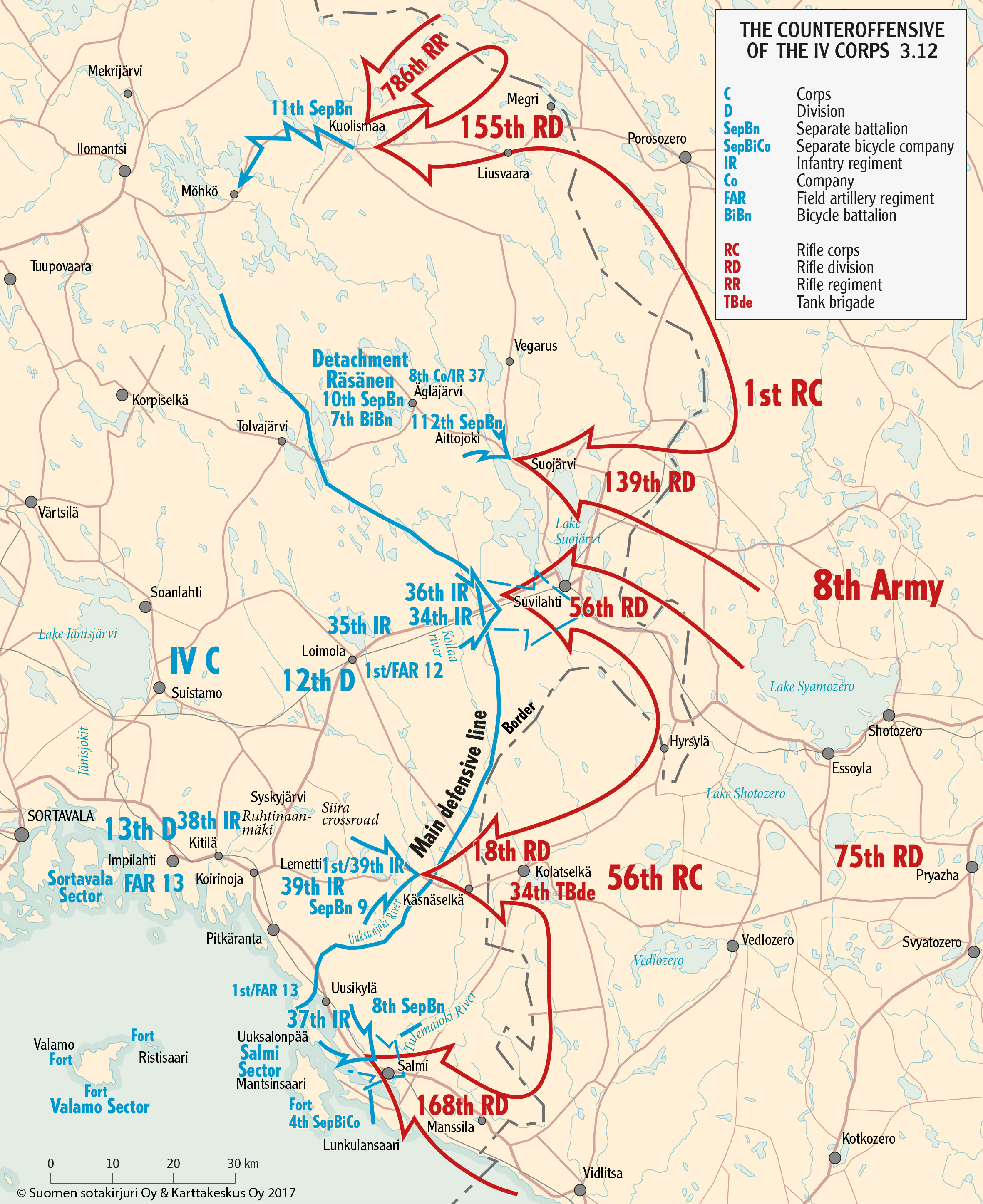 In the area defended by Heiskanen’s corps (IV C), Soviet troops crossed the national border via all roads on the morning of 30 November. The Soviet rifle division (155th RD) that attacked in the Porajärvi (Porosozero) area launched its attack partially through roadless terrain. A separate battalion (11th SepBn) under the direct command of the IV Corps was forced by the enemy to withdraw to the area of Kuolismaa (Kolezhma) on 2 December.

A rifle division (168th RD) that attacked along the road travelling along the shore of Lake Ladoga advanced approximately ten kilometres on the first day. Having delayed Soviet troops in the area around the road, the units in Hannuksela’s division (13th D) withdrew to the area west of the Tulemajoki River as planned. At this location, they repelled the enemy’s attempts to cross the river on 1 December. The following day, based on an incorrect picture of the situation, the division’s commander gave the troops permission to continue withdrawing towards Uusikylä.

A rifle division (18th RD) reinforced with a tank brigade (34th TBde) advanced along the Kolatselkä road to the Finns’ defensive positions in the area west of Käsnäselkä on 2 December.

The Suojärvi area was lost on 2 December. 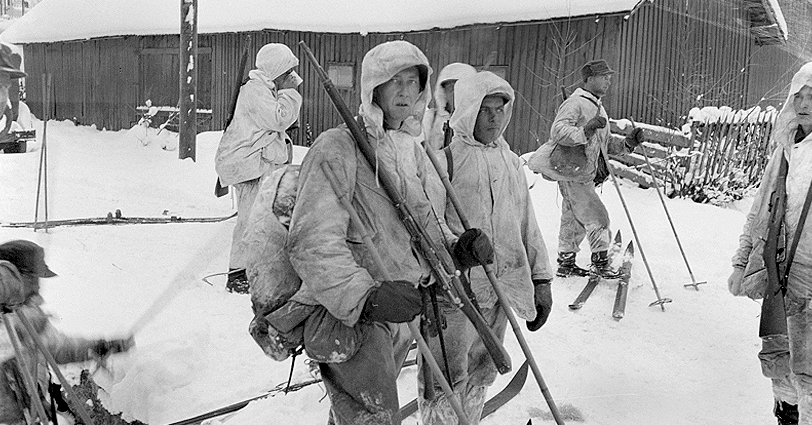 Men from the 2nd Battalion of the 34th Rifle Regiment in the Suojärvi area on 3 December 1939. SA-kuva.

Two Soviet rifle divisions (56th RD and 139th RD) attacked in the Suojärvi area. On 1 December, the units in Tiainen’s division (12th D) stopped an attack by an enemy division (56th RD). The attack came from the direction of Hyrsylä and was stopped in the area southeast of Suvilahti, the central village of Suojärvi.

A Soviet division (139th RD) that attacked in the area north of Suvilahti reached the eastern shore of Lake Suojärvi and the road travelling along it, located in the area of responsibility of Detachment Räsänen, on the morning of 1 December. Over the course of the day, the enemy also gained control of the northern end of the road travelling to the west of the lake. On 2 December, Tiainen decided to abandon Suvilahti and gave permission to the units that held delaying positions on the southeast side of Suvilahti to withdraw.

The General Headquarters ordered a counteroffensive

After the loss of the Suojärvi area, the commander-in-chief, Field Marshal Mannerheim, gave an order on 2 December for Heiskanen’s corps (IV C) to retake Suojärvi with an offensive that would be launched the following day. In the detailed order signed by Mannerheim and the chief of the General Staff, Lieutenant General Lennart Oesch, the mission was assigned to the 12th Division. Detachment Räsänen was also ordered to advance towards Suojärvi within its own area.

According to the order from the General Headquarters, Hannuksela’s division (13th D) was to advance towards the Salmi road, with the aim of reaching the Tulemajoki River. In the order issued

by the corps to the 13th Division, the division was also ordered to advance east along the road from Käsnäselkä.

The counteroffensive was unsuccessful – the corps commander was replaced

The counteroffensives were unsuccessful in all areas, leading to partial disorder among the troops of Heiskanen’s corps (IV C).

On 3 December, the commander-in-chief appointed Jaeger Officer, Major General Woldemar Hägglund as the new commander of the IV Corps. The change in command took place the following day.

The area between Ilomantsi and Suojärvi was detached from the area of responsibility of the IV Corps with an order from the General Headquarters on 5 December.