A counteroffensive by Hägglund’s corps (IV C) in January led to the road travelling along the shore of Lake Ladoga being blocked. This resulted in the forming of the large-scale motti of Kitilä. Trapped in the pocket, known as motti in Finnish, was one of the enemy’s rifle divisions. The troops of an enemy division that had attacked along the Käsnäselkä road were trapped in several mottis. The largest of these were in the Lemetti area.

The counterattacks in December had stopped the enemy’s attacks

Towards the end of December, Finnish forces had cut off the Soviets’ northern supply road between Kitilä and Käsnäselkä (Kyasnyaselkya). The supply transport on the road travelling along the shore of Lake Ladoga between Kitilä and Salmi was also disrupted by patrols of the Mantsinsaari Fort, which was subordinate to the Ladoga Naval Defence. Snow storms in early January sometimes interrupted transport on the shore road.

Mission assigned by the commander-in-chief

Hägglund’s corps (IV C) prepared for a new large-scale encirclement attack at the beginning of January. According to the attack order issued by the commander-in-chief, the corps was to attack and destroy the enemy forces in the area of Koirinoja–Kitilä–Syskyjärvi (Syuskyuyarvi). The corps first decided to cut off the enemy forces’ transport routes to the east at the Lake Ladoga and Syskyjärvi line.

The assault forces were divided into battle groups

The offensive was led by the corps’ commander, Major General Woldemar Hägglund. At the front line between Koirinoja and Syskyjärvi, two battle groups (Jousimies and Oinas) prevented the enemy from advancing west and prepared, for their part, to participate in the offensive. Both battle groups had the strength of a reinforced infantry regiment, i.e. each of them comprised three battalions as well as other units.

The assault unit, which consisted of seven battalions, was divided into two battle groups (Mehiläinen and Lohikäärme). The assault unit also included one light detachment. One battle group (Tykki) with the strength of approximately three battalions was to keep the road between Kitilä and Käsnäselkä blocked and expand the blocked area with an offensive.

The offensive started on 6 January 1940

The offensive started on 6 January and advanced to Koirinoja within four days. The large-scale motti of Kitilä had been formed. Ten days later, the assault troops reached the vicinity of Pitkäranta (Pitkyaranta), where the offensive stopped for good.

Several mottis formed on the Käsnäselkä–Kitilä road, on the Soviets’ advance route. The Soviet forces trapped in them persistently defended themselves. 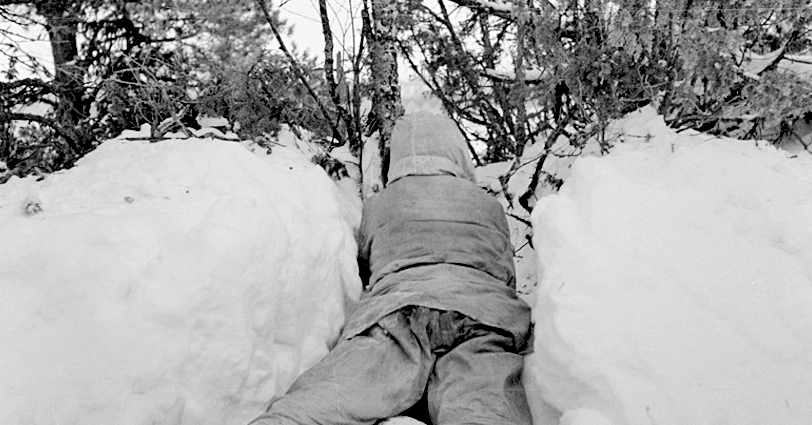 A soldier with a light machine gun in position on the island of Paimionsaari in the Pitkäranta archipelago on 1 February 1940. SA-kuva.

The Mantsinsaari Fort of the Ladoga Naval Defence continued disrupting the enemy’s transport operations on the Salmi–Pitkäranta road travelling along the shore of Lake Ladoga. The fort’s troops retook Uuksalonpää and the northwest end of Lunkulansaari Island.

Hard battles were fought over the islands off the coast of Pitkäranta. Soviet forces were able to provide partial logistics support to the encircled 168th Rifle Division via a route across the frozen Lake Ladoga.