Battles at the Mannerheim Line in February 1940

In February 1940, the Northwestern Front of the Red Army launched its attack on the Karelian Isthmus. The preparatory attacks started on 1 February and the actual large-scale offensive aiming to break through the Mannerheim Line on 11 February. It focused on the western Karelian Isthmus. The breakthrough area was located in the Finnish Summa and Lähde sectors. The breach achieved by the Soviets in the Lähde sector expanded the following day. The counterattacks launched by the Finns were unsuccessful. On 15 February, the commander-in-chief decided that the II Corps, which was in charge of defending the western Karelian Isthmus, would be pulled back to the Interim Line.

The number of Red Army divisions almost tripled in January

The 13th Army was formed on the eastern Karelian Isthmus

The Northwestern Front assumed leadership of the armies

In January, the armies were subordinated to the newly established command echelon, the Northwestern Front. It was commanded by Army Commander 1st Rank Semyon K. Timoshenko. He was promoted to marshal of the Soviet Union after the end of the Winter War.

The number of rifle corps command echelons at the Northwestern Front’s disposal increased from three in December to seven by the end of January. The 10th Tank Corps, which had been deployed on the Isthmus in December, was disbanded in January. Its tank brigades and other troops were divided between the armies.

The focus of the 7th Army’s attack was in the area between Karhula and Lake Muolaanjärvi (Glubokoye). Three rifle corps command echelons, nine rifle divisions, an entire army-led artillery force and approximately 70% of the army’s tanks were concentrated in this 17-kilometre-wide area. Each of the five rifle divisions that would be attacking in the first wave were assigned to a breakthrough area spanning 2–2½ kilometres in width. They were armed with an average of 72 guns and 40 tanks per one kilometre of the front.

The Summa and Lähde areas as breakthrough areas

The army focused its breakthrough attack in the area between Summa and Lähde. This is where the 50th Rifle Corps launched an offensive, with its divisions grouped into two waves. The first wave comprised two rifle divisions, one in the Summa area and the other in the Lähde area.

Two Finnish divisions were in defensive positions in the 7th Army’s focus area, i.e. the attack area of the two rifle corps. These divisions were the 3rd Division, commanded by Jaeger Officer, Colonel Paavo Paalu, and the 1st Division, commanded by Jaeger Officer, Major General Taavetti Laatikainen. The enemy’s breakthrough area was located in the area defended by the 3rd Division.

The 13th Army, which was deployed on the eastern Karelian Isthmus and under Grendal’s command, comprised three rifle corps. In practice, the army focused on a part of the western Karelian Isthmus that is also known as the Central Karelian Isthmus. The army attacked this area with six divisions. One half of them belonged to the 23rd Rifle Corps and the other half to the 15th Rifle Corps. The attack by the rifle corps in the focus area was supported by 60 artillery battalions, i.e. 720 field guns and almost 480 tanks, in addition to other units. The Taipale (Solovyovo) area was left as a secondary front that was attacked by one rifle corps (3rd RC) comprising three rifle divisions. 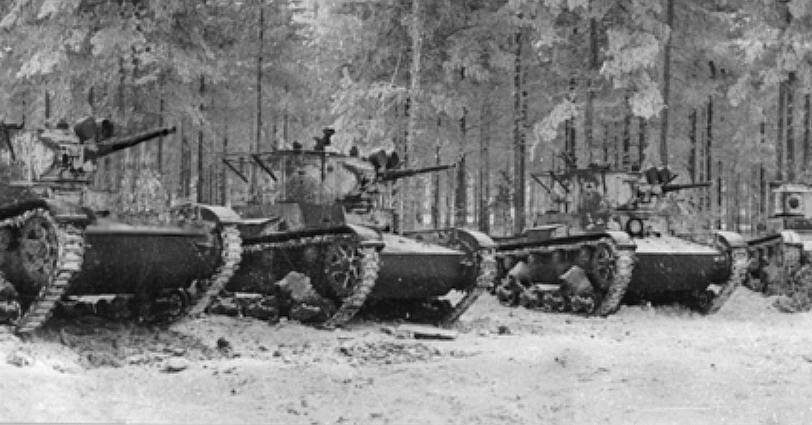 On 1 February, Timoshenko ordered his forces to launch attacks in the areas of Summa, Muurila (Murino) and Karhula on the western Karelian Isthmus in preparation for the large-scale offensive. These local preparatory attacks were powerful. The majority of the division that had served as the commander-in-chief’s reserve on the Isthmus had to be assigned to the II Corps even before the large-scale offensive started. When it did start, the Finns had no significant reserves left. 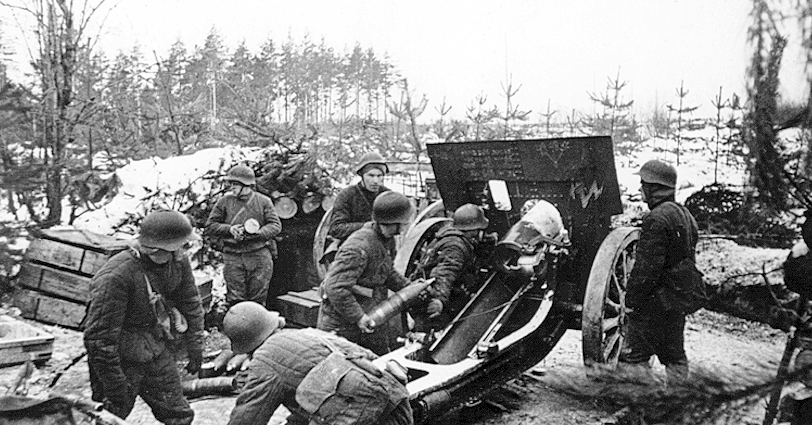 A field gun of the Red Army in action on the Karelian Isthmus. Image via Juri Kilin.

The preparatory attacks were already underway when Timoshenko decided that the large-scale offensive would be launched on 11 February. The flying weather on the day of the attack made it difficult to provide aerial support for the attack. The artillery began its preparatory fire at 8:40am, and the troops set out at 11am.

The Summa sector was being defended by the 7th Infantry Regiment of Paalu’s Division, commanded by Jaeger Officer, Colonel K. A. Heiskanen. The 8th Infantry Regiment, commanded by Major Sulo Laaksonen, was in charge of the Lähde sector. The infantry regiment’s 1st Battalion (I/8th IR), which had been at the front line since the beginning of February, had just been replaced with a battalion that had served as a reserve to the infantry regiment that had been responsible for defending the Merkki sector. This battalion was the 2nd Battalion of the 9th Infantry Regiment (II/9th IR).

Breakthrough in the Lähde sector 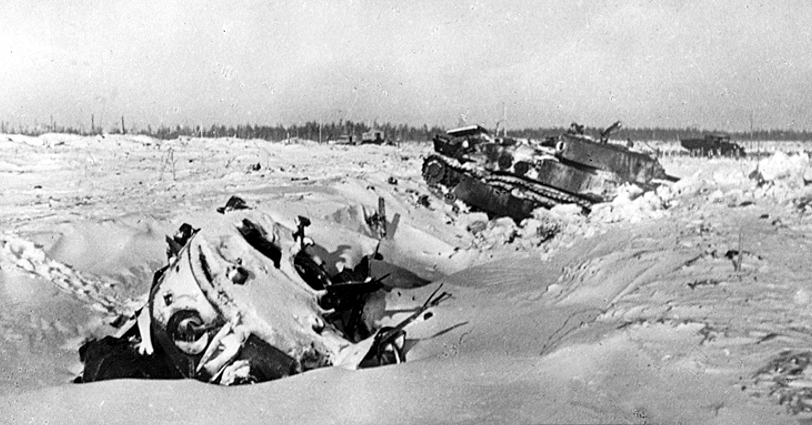 A heavy T-28 tank of the Red Army stopped by a Finnish anti-tank obstacle in the Lähde sector near Munasuo. Image via Juri Kilin.

The troops of Alyabushev’s rifle division were able to breach the Finnish front line on the first day of the attack. A rifle division (7th RD) of the 50th Corps (50th RC) that had been assigned to the second wave was used to expand the successful breach the following day. The 123rd Rifle Division, which had achieved the breach, was at first assigned one rifle regiment. The breach widened on 12 February The Northwestern Front achieved more modest success in its other areas of attack.

On 12 February, Army Commander Meretskov changed the mission of Ermakov’s rifle division (100th RD), which was engaging in an attack in the Summa area. Instead of attempting a breakthrough, the division was tasked with keeping the Finnish defenders engaged. On the same day, he ordered a tank battalion and one of the machine gun brigade’s battalions to deploy to the Lähde area by the morning of 13 February.

The 5th Division, which was commanded by Jaeger Officer, Colonel Selim Isakson and which had been the commander-in-chief’s reserve, was subordinated to the Army of the Isthmus. Österman subordinated one infantry regiment from the division to the II Corps for use in a counterattack in the Lähde area. Over the course of the following day, the regiment was used to reinforce the front line where it was at the time. No actual counterattack was carried out.

On the evening of 12 February, Österman subordinated Isakson’s division (5th D) to the II Corps.

Öhquist ordered Isakson to retake the main defensive positions in the Lähde sector and assume responsibility for the front in the 3rd Division’s defensive area.

Only one undermanned infantry regiment from Isakson’s division (5th D) was unengaged in combat on the morning of 13 February. This 14th Infantry Regiment, commanded by Jaeger Officer, Colonel Väinö Polttila, launched its attack on 13 February with two battalions. Polttila was wounded by the enemy’s preparatory artillery fire at his command post prior to the start of the attack. He died of his wounds after the war.

The breach was developing into a breakthrough

By the evening of 13 February, the breach achieved by the Soviets in the Mannerheim Line was five kilometres wide and six kilometres deep. One more motorised rifle division (84th MoRD) was subordinated to Gorelenko’s rifle corps.

Negotiations of the Finnish military command on 14 February

Commander-in-Chief Mannerheim arrived for negotiations at the II Corps Headquarters in the Saarela Manor on the Isthmus on 14 February. Present at the negotiations were Öhquist as well as the commander of the Army of the Isthmus, Lieutenant General Österman and Quartermaster-General of the General Headquarters, Colonel Aksel Airo. Mannerheim’s subordinates concurred that the II Corps had to be pulled from the Mannerheim Line to the Interim Line, despite the fact that, with the exception of the Lähde sector, the II corps’ forces had repelled all enemy attacks.

Fighting continued in the breakthrough area on 15 February. At 3.25pm, Öhquist gave Isakson permission to retreat to the Huumolan Autio–Kultakumpu–Kiltee line.

Lieutenant Colonel Ilmari Karhu’s 15th Infantry Regiment, which had assumed responsibility for the front in the Summankylä sector from Heiskanen’s 7th Infantry Regiment during the fighting, began to withdraw from Summa towards Huumolan Autio in the evening.

At 3.30pm on 15 February, the commander-in-chief made the decision to withdraw the troops deployed on the western Karelian Isthmus from the Mannerheim Line. The troops on the eastern Karelian Isthmus were to remain at the main defensive line. Öhquist’s army corps (II C) was to withdraw to the Interim Line. Based on the decision, the General Headquarters issued an order to the Army of the Isthmus, which in turn issued its own order to the II Corps. Öhquist received the army’s order at 7:20pm in the evening. The commander of the army corps already had prior knowledge of the decision, so the headquarters was already preparing to issue an order to the army corps.